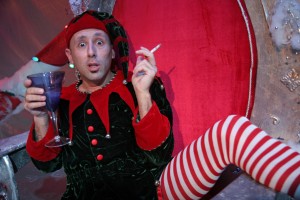 Twenty years ago, a relatively unknown David Sedaris burst onto the NPR scene with a first-hand account of working as a Macy’s elf. The rest, as they say, is history. Joe Mantello adapted the short story into a snippy one-man show, which star Mitchell Fain declares at the start is detested by Sedaris. Whether or not the author has a problem with the stage version, Chicago does not.  Now in its ninth season and directed for Theater Wit by Jeremy Wechsler, “The Santaland Diaries” is a sardonic look at the false merriment manufactured by big retail stores.

As Crumpet (the disgruntled elf), Fain explicitly states that he is not David Sedaris and isn’t trying to be. Fain also establishes that the theater is his house and his casual manners are comforting, like listening to an old friend tell jokes over cocktails. In a sort of North Pole open mic, Fain really gets down to the true meaning of Christmas, which is shopping. From the frontlines of retail nobody is safe from his scrutiny, not even Santa himself. The most impressive thing about this show is just how far Fain pushes it, catching you off-guard with jokes you know you shouldn’t be laughing at but you can’t help yourself. Fain blends his own sense of humor seamlessly with Sedaris’ glass-half-empty narrative style.

“The Santaland Diaries” is essentially the antithesis to “Miracle on 34th Street.” Instead of appealing to the family-friendly mentality, Theater Wit panders to the childless and cynical. Sedaris and Fain build a compelling case for why Christmas can be an awful time to be working in retail, let alone costumed retail. Complete with a festive department store backdrop and whimsical lighting, “The Santaland Diaries” is infectiously fun, calling upon everyone to laugh at themselves. Clocking in at just over an hour, Fain should be commended on his dense arsenal of jokes and bits that have audiences literally doubled over with laughter for eighty minutes straight. (John J. Accrocco)