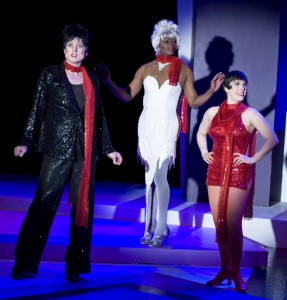 “It’s Liza!” sings, who else, but the unshakable Ms. Liza Minnelli, the irreverent Broadway songstress whose status as a gay icon, by now, may very well have surpassed her “Over The Rainbow” mother Judy Garland’s. “Screw the writers and the story!” continues one of a fabulous triptych of Minnellis in About Face Theatre’s “We Three Lizas,” a world-premiere new musical with certain promise that opened on Sunday night at the Steppenwolf Garage. Unsurprisingly, Liza and I are in complete agreement on the matter. Screw the story. Bring on the Lizas!

Were the framing narrative (yet another parody of Charles Dickens’ “A Christmas Carol”) not a squeaky clean live-action “Rudolph the Red-Nosed Reindeer” with hints of innuendo snuck in, but the full-fledged gay camp it purports to be, perhaps it could coexist with the three thunderous Lizas who shake the dust off their material with New York nightclub attitude and awaken their sterile surroundings. Steppenwolf Garage is always an unforgiving space with low ceilings, scattered points of focus and a wanton feeling of impermanence, but Jerre Dye’s set, though too eggshell white, harnesses the energies with a strong diagonal runway.

But the story of a design factory’s cold, detached owner, Mr. Conrad (Scott Duff), who comes upon a magic book of spells with the power to grant him his three wishes—youth, wealth and beauty—is little more than a mystical kitschy subplot of “How To Succeed In Business Without Really Trying.” His factory appears to manufacture clothing, at first, with awkward blocks being Conrad’s (whose actual last name is the adolescently tinted “Ticklebottom”) aesthetic. But then a sea of unexplainable objects takes stage with the geometric exaggeration and color saturate of the Whoville mail room. The play, boasting three amazing Liza Minnelli impersonators (two in drag) who lead the cantankerous Conrad and his introverted assistant Reggie (Dana Tretta, singing her ballad with supple dynamic variance) through time to an upbeat, moral-of-the-story conclusion, does not require a wallop of weird accoutrements to aid it in making logical sense. After all, since when has Liza Minnelli ever made any sense?

What serves the production (directed by Scott Ferguson) best right now are its Lizas, its score, and its central heart, kept beating by Andrew Swan and John Francisco’s sweet rendering of the young Conrad’s first love. Scott Bradley’s book lacks the witty vulgarisms of camptacular drag maestro Charles Busch and the believable but fantastic environments and situations of his contemporary Charles Ludlam, both of whom would provide it with the balls Liza so effusively advocates for. The goings—beginning with forty-five minutes of cabaret, which would benefit from some concert lighting—are awfully slow until the Ghost of Christmas Past, Liza Was (Danielle Plisz, big-eyed with pitch-perfect comedic timing), explodes onto the stage. However, Alan Schmuckler’s score (with lyrics by Bradley that are better than his book), a buoyant gift wrapped in a melodic, dramatically well-conceived bow, is a real find.

But, oh, those Lizas. The Liza scenes, long in literal length, although fleeting in relation to the rest of the play, lurch the audience into kinky submission. The laughs, big and belly, abound because of a perfect concoction of Liza-fanatic humor, atmospheric New York lounge tunes, Patrick Andrews’ wild off-the-shoulder choreography, and ingenious performers who joyously inhabit the Broadway star. It is no wonder that the book writer himself plays Liza Is, essentially the Ghost of  Christmas Present manifested in the Minnelli of today (The third Liza, Mystique—a sassy and hungry Sean Blake—is the omnipresent Great Queen of Wishes). Bradley, without a doubt, knows Liza inside and out, but he doesn’t quite have a solid hold on the broader world of this play yet. Despite all that, it is certainly a refreshing joy to see an effervescent Liza Minnelli dancing around in a sparkly sequin dress instead of a big old bearded dude slumping upstage in a santa suit. (Johnny Oleksinski)