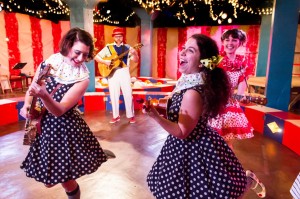 Following in the footsteps of its highly successful and innovative “Pirates of Penzance,” which is being revived and running in repertory alongside of this offering, the Hypocrites are once again turning to Gilbert & Sullivan this holiday season.

Those who only like their Gilbert & Sullivan served up with all of the trimmings, i.e., trained voices, full orchestrations, full chorus, et al, would be well-warned to stay away from Sean Graney’s musically minimalist version of either “Pirates of Penzance” or his newest G & S adaptation of the Victorian duo’s most famous work, “The Mikado.”

As with “Pirates,” Sullivan’s orchestrations are stripped down to the lowest-common-denominator guitar chords, largely strummed by the performers themselves hootenanny style, sometimes incorporating clarinet, banjo, mandolin, ukulele and accordion.

From the opening change of lyric from “If you want to know who we are, we are gentlemen of this land” instead of “from Japan,” it is clear that the Japanese contours of the allegorical work are minimalized. And yet, the Victorian ambiance is retained by the characters having faux British accents and often singing in a highly stylized manner, cleverly making G & S performance traditions themselves part of what is satirized here.

The setting is a circus, one large and one small ring, with characters by and large shown as the clown-like troubadours that they are. That atmosphere is established from the moment the space is entered into with performer and audience sing-alongs of folk-rock repertoire and games of catch with balloons, et al, ensuring connective interplay between the audience and the performers before the work itself begins and requiring the audience to move along with the action, often literally.

It was particularly interesting that at Sunday’s repertory opening there were many small children who were brought right into the story in some clever ways. It was an hysterical moment when Katisha makes her appearance, she enters into play with the children but of course, quickly becomes a spoiled child herself.

There are many clever twists and turns in this campy production which would be unfair to spoil here, which are also protected by the fact that the program is not given out until the eighty-minute adaptation has concluded. Suffice to say that there is a significant amount of doubling of characters that, in this case, reveal some monumental psychological undercurrent and reveal an astonishing diversity of performing abilities.

And yes, while the music is heavily cut, some of the operetta’s most melodic moments are surprisingly effective in this format, notably Emily Casey’s tender traversal of “The sun whose rays are all ablaze” as a folk ballad with her own guitar accompaniment. (Dennis Polkow)