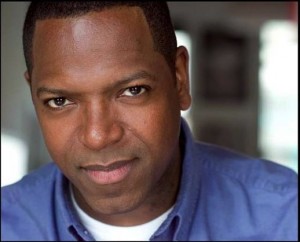 If Chicago actor James Vincent Meredith looks familiar, he has been a fixture on Chicago stages for years. But even those who have not caught his distinctive performances across the area may recognize him from his recurring role on “Boss,” the Starz television series starring Kelsey Grammer where Meredith plays South Side Alderman Ross.

“Usually just exteriors are shot in Chicago when a series is set there,” says Meredith, “but the entire series is shot here, so actors and crew members get a chance to show what they are made of by being shot exclusively here.” That has been wonderful for Meredith since it has not only meant that he could continue working Chicago stages while the series shot but it also meant short commutes for the Chicago native.

“I was born in Chicago,” says Meredith, “I went to Evanston Township High School but actually started learning about acting and such at Piven Theatre Workshop, which is based in Evanston. Byrne and Joyce Piven were my main teachers at that time and taught me a lot and gave me confidence that I didn’t know I had, although in high school, everyone has confidence issues. I started acting there and went to school in Champaign and then came back up here in ’94.”

The “breakout” show for Meredith was Goodman Theatre’s “Raisin in the Sun” in 1999, “one of the last shows in the old space,” says Meredith. “I remember when I first got the role, I wasn’t in the union yet and they called and asked me and I kept thinking, ‘What do I do? I have a regular job, how does that work?’ I made very little those first years. When you join the union and nobody really knows your work, you can kind of go hungry for a while.

“Once you do break into the larger theaters, you’re usually playing the glorified solder from the left so you get your chops going in the smaller theaters. It took a while to get to the point where I was able to do roles that I wanted to do at those theaters, but you know, that is what every actor goes through in Chicago: it’s par for the course.” 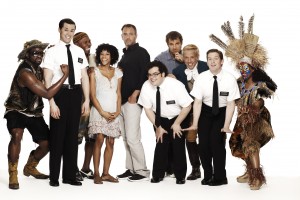 Even in high school, Meredith had a Steppenwolf t-shirt and “wore it around and told people that I would be there one day.” That goal happened in 2005 when Vincent did his first play there, “Take Me Out,” followed by Bruce Norris’ “Pain and the Itch” that summer.

“That was a pretty amazing experience [two Steppenwolf shows back-to-back],” says Meredith. “To be sitting across the table at the first rehearsal from Mariann Mayberry, Kate Arrington and Tracy Letts, all people that you read about and admire their work over the years, so to be in the same room with them reading a play was a pretty amazing experience.” Meredith became a Steppenwolf ensemble member two years later and has performed in a wide variety of productions there since.

“The great thing about Steppenwolf is how supportive everyone is,” Meredith notes. “Usually when I have anything else I am being considered for in another theater, they’re the first call I make. As you know, they are dealing with folks that have far more substantial careers than mine whom they have to work with and figure things out timing wise. I’m just honored to be asked, ‘What are you doing?’ ”

Despite the amazing diversity of compelling roles that Meredith has done at Steppenwolf and other area theaters, musicals had not been a genre he had delved much into, which is why his being cast in the touring production of the hit musical “The Book of Mormon” came as somewhat of a surprise.

“About 2006, I did ‘The King and I’ with Joe Foronda and Mary Ernster over at Drury Lane,” Meredith recalls, “but my role was such I was kind of singing in the background. It was pretty much a straight role, though I sang a bit in the finale. So that was about it.

“When ‘The Book of Mormon’ came up, I said, ‘I don’t know if this is really going to work, but my agent said, ‘Look, just do me a favor and go and try. You’ll be surprised at how good you are at this kind of stuff. I think you don’t give yourself enough credit.’ So I went and read and got a callback and some time went by and the powers that be thought it would work. If you had told me a year ago that I’d be doing this, I would have laughed in your face.” 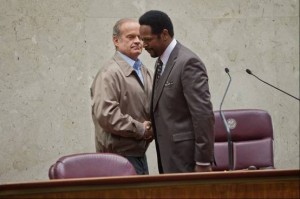 How did Meredith approach the singing aspect? “Very slowly,” he says. “I remember the first couple of rehearsals where we worked hard at really trying to get the score down and now, in retrospect, I see how important that was. You get it in your head so that you can concentrate on the other aspects of the show. But it’s a lot of demanding music. For me, someone who’s used to karaoke bars and not much else, it was a real challenge.

“It took a while, I grabbed a music coach in New York and I also have one here in town and have worked with them a lot in order to make sure that I was ready not only to hit the notes, but also to get the stamina that it takes to do eight shows a week in a musical. It’s a different type of stamina than doing eight shows on a Steppenwolf stage just because of the music and the demands in terms of breathing and all of that, so it’s been a crash course. But the cast, the director and everyone have been very, very supportive and I feel with every rehearsal that I am getting closer to really owning the role as far as one can.

“My role is the father of the African heroine of the show. I have one song that I lead in the first half of the show that is a lot of fun, a big production number, though there are several others. I am in awe every time I come into rehearsal and see these actors who are true triple threats: damn good actors but also amazing at dancing and singing. I know that Chicago has a great number of triple threats that do this for a living, and I know they work all the time here in Chicago, I just haven’t been lucky enough to see a lot of those shows. It is amazing work that they do.”

Meredith’s deep sonorous speaking voice is so mellifluous and memorable whether on stage or in casual conservation that it would seem a short jump for him to be singing on stage. “It’s a very different world and a different way to approach a story than what I’ve usually done. There’s a reason that these guys are so successful. Part of the fun is that Trey Parker and Matt Stone have a great gift for making these characters funny even before the actors get in a costume.

“We don’t really have to do too terribly much to really make these characters ‘sing.’ I try not to veer too much away from what the script is giving me. They have a gift for timing and for setting up of jokes or whatever you want to call them. Yet somehow in the course of all of that, you come across this story that at the very end, after you’ve been laughing for two hours, you find that you are very attached to these characters, much more than you thought you would be. It’s unlike anything you’ve heard, and yet its emotional weight by the end is quite surprising. At least it was for me.

“As an actor you try to find shows that appeal to you and you find yourself challenged by and that’s this show, for sure. You want to try as an actor to tackle what you fear to make you a stronger person. The idea and concept of musicals are something I had always shied away from for a long time. For me, there’s a great amount of comfort in attacking something like that because there’s an amount of fear involved but also to be able to do it in my hometown where I am comfortable and at peace makes this a wonderful, wonderful gig. And you cannot beat being able to take the Green Line and be there in twenty minutes.”

Has this role opened up a new body of work for Meredith? Might we see him in other musicals? “Thinking like that has not even crossed my mind yet,” he admits. “Right now, I know that for the coming year, I am with ‘Book of Mormon.’ I can tell you that for me, it’s one year at a time. I can’t even think beyond that right now, especially since ‘Boss’ was just cancelled. I will miss it greatly but it was a wonderful experience. What is the old saying, ‘God closes a door and opens a window?’ This is a pretty big window.”