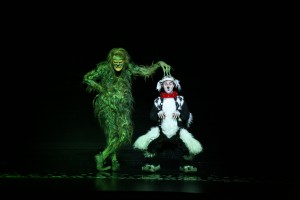 It is no easy task to take the rhyming, whimsical world of Dr. Seuss and bring it to life. Boris Karloff and Chuck Jones did it wonderfully well in the 1966 animated version of “How the Grinch Stole Christmas!” which is still a holiday staple more than four and half decades after its original airing.

Ron Howard, on the other hand, was light-years less effective and less successful in his 2000 movie version and, of course, the Broadway musical “Seussical” received a lukewarm reception, at best. With that track record, expectations were hardly high for a new musical based on the Grinch.

Making good use of two Albert Hague/Dr. Seuss songs from the television special, “Welcome Christmas” and “You’re a Mean One, Mr. Grinch”—although oddly omitting the third song, “Trim Up the Tree”—the story and characters have been filled out and given new songs by Mel Marvin and Timothy Mason.

An elderly Max the Dog (Bob Lauder) is an Old Deuteronomy knockoff as he narrates the tale, beginning with a song and dance routine with his younger self (Seth Bazacas).

The Whos are an entire family here, whose celebrating of Christmas we experience in the Cratchit mold and which makes the attempt to steal the family’s Christmas more engaging since we have a better sense of Who is celebrating, so to speak.

Stefan Karl is an ornery Grinch with enough heart from the get-go and enough crankiness even post-transformation to be credible. His playfulness with the kids in the audience is almost that of a pro-wrestler villain, i.e., a guy they love to hate.

Thankfully, he is set off wonderfully well by a Cindy-Lou Who (Jenna Iacono and Georgia Kay Wise alternating) who mercifully avoids “Annie”-like belting and sees good in the Grinch where everyone else expects bad. Her unconditional acceptance melts the Grinch’s harshness and her image of him becomes something the Grinch is forced to measure up to, a key component of his redemption and an enduring lesson for all ages.

The songs are classic Broadway style with chorus and orchestra and there are the expected ballads and ensemble numbers with plenty of splashy choreography by John DeLuca and Bob Richard. The sets and costumes are wonderfully right out of the pink, red, black and white pages of the original 1957 Dr. Seuss book.

At ninety minutes with no intermission, the proceedings captured the attention of the many children there on opening night while remaining entertaining for the adults, no small feat. (Dennis Polkow)