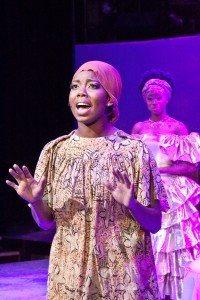 The holidays in Chicago are rife with theater traditions. Scrooges, Pirates, Klingons, George Baileys: creative clashes of humor, popular culture and nostalgia that pack in the crowds year after year. Understatedly remarkable is that two of the most longstanding of the bunch, the Goodman Theatre’s “A Christmas Carol” and Black Ensemble Theater’s “The Other Cinderella,” came into existence only one year apart and are still both going strong—thanks largely to the companies’ commitment to combining tried-and-true tradition with refreshing approaches and portrayals.

In its thirty-six years of biennial productions, I’d neither seen Black Ensemble Theater’s contemporary, musical Cinderella, nor did I expect to embrace the show as wholeheartedly and with the jovial enthusiasm that I ultimately did. You may wonder what stones Walt Disney, Richard Rodgers and Oscar Hammerstein, all having crafted their own well-loved Cinderellas, could possibly have left unturned. Truly, a whole rock garden.

In the Kingdom of Other (designed by Dave Ferguson using coy Easter-egg pastels to shine focus on June Saito’s vibrant, best-prom-ever costumes) no person is exactly who they appear to be. Writer-director Jackie Taylor, who first presented the work at BET in 1976 (with some songs written by Michael Ward and Herman Wheatley), jettisoned the story’s fairytale superficiality, kept close the central heart and aesthetic sparkle, and grounded the plot in real-world urban problems. The result is not just another Cinderella, but the most honest, splendid, uproarious Cinderella you will ever see.

In the Kingdom of Other resides a suave Prince (Lawrence Williams) with close gay pals, a pasty white Dorothy of Oz (Erin O’Shea) who wants nothing more than to fit in with a community. Here, a wicked Stepmama (Dawn Bless) might not be so plain-faced wicked after all, but a strict adoptive mom who works long hours at the post office. A King (Dwight Neal) and Queen (Rhonda Preston) might not be the quintessential portrait of regal perfection, but reasonably flawed parents who struggle to help their son find happiness as so many parents do. This is a mystical place where a teenager with wild hair and a hoodie can rise above the constraints of his neighborhood and folks’ ignorant perceptions to play a vital and appreciated role as Page (Raymond Wise) of the palace. All this and Taye Diggs can be your chauffeur in a magic carriage. The Kingdom of Other sounds awfully good, right?

Aurally it sounds transcendent. Taylor’s knockout cast, many appearing in the show for the first time, is without question the strongest ensemble of musical talent on a Chicago stage this winter. Backed up by a jamming five-member band (music director Robert Reddrick), the moment any and every actor parts their lips there emerges a sound so full, empowered and controlled that a flow of emotion, be it giddiness or sorrow, becomes impossible to repress. And why would you? 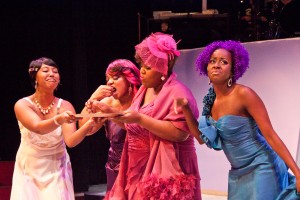 Fierce ingenue Ta-Tynisa Wilson’s fresh and funny Cinderella stuns with “No Souvenirs,” after learning the closest she’ll get to her coveted ball is a commemorative pin. The more feeling performances, lead by Wilson and Preston as The Queen, are paired with their compatriots’ wild comic turns. The Stepsisters’ (the hysterical Jessica Moore and Lisa Beasley) delusions of grandeur and waning intelligence are hilariously loudmouthed with big and bold physicality, begging laughter at every lazy move, or, lack thereof. Wise’s Page from the ‘hood is always funny as he navigates the foreign opulence of the palace, but resoundingly moving in his unwavering earnestness to make a new life for himself while still keeping his old friends close. Bless’ big-voiced Stepmama, although owning many a dramatic moment, brings you to slaphappy tears and hollers as she rips off her weave in a delightful preemptive fight maneuver. Supported by this stellar cast, BET’s sprawling, though still inclusive, new space on Clark Street smoothly and stylishly adorns Cinderella’s glass slipper. (Johnny Oleksinski)