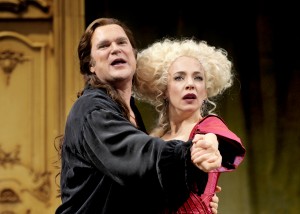 “Society’s nothing but a school for lies. This city’s built on them. And may it wilt on them.” You’ve got to hand it to playwright David Ives. For his devilishly concocted adaptation of Molière’s “Le Misanthrope,” he has chosen a whole new title, “The School for Lies,” owning up to the fact that this new amalgamation of the proper, poetic and in-your-face colloquial is as much Ives’ property as it is Molière’s, if not more. His new version of the French classic, which opened Wednesday night at Chicago Shakespeare Theater, bustles with raps (as all classic plays seem to these days), Python-esque drag, coarse vulgarity, LOLs and a repetitious food gag that is something out of Goldoni or Feydeau. Although the play requires an overlong running start, once “The School for Lies” hits its stride it settles into a gleeful, knockaround farce. And the second act is a triumphantly rich treat.

For Molière fans—and there must be many of you out there since Court Theatre is presenting two more of his plays in the spring—the plot (without consideration for Ives’ hit-and-miss devices) is close to that of “The Misanthrope,” albeit with a sappy new ending of Shakespearean mistaken identity and reconciliation. The titular misanthrope, here named Frank (Ben Carlson) as Ives’ first act of sinful deviance, mopes about in a restrictive black wardrobe, slinging honest insults at anyone who doesn’t care to listen. One painstakingly ambivalent spectator is Celimene (Deborah Hay), a fine woman with three foppish suitors (Kevin Gudahl, Paul Slade Smith and Greg Vinkler) who becomes the witting object of cantankerous Frank’s affections. But if only it were so simple. To complicate matters, the older, conniving Arsinoé (Judith Marie-Bergan) and the young and sweet Eliante (Heidi Kettenring) also fall for the reformed jerk. After all, everyone loves an ass.

Ives has written “The School for Lies” in rhyming iambic pentameter couplets. For two hours fifteen minutes, that format can be awfully tough to swallow. While Molière certainly used couplets, he wrote with alexandrines like the great classic French dramatist that he was. Though Ives’ overly clever rhymes occasionally grate on the ears with their inevitable upward inflections and impossibly wide vocabulary, I was tickled by his move from alexandrines to iambic pentameter—honoring Molière with verse while bitchily Anglicizing his play. And at a theater named for an Englishman, no less! Such irresponsible mischief is very Molière. 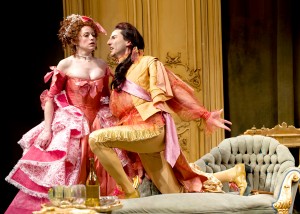 But there is a solid argument for translation/adaptations adhering to this pattern, so abrupt to our contemporary prosaic ears. David Hirson’s “La Bête,” modeled in the spirit of Molière, is the strongest modern example of well-employed rhyming couplets onstage, and it’s a total joy to revel in its wit. However, “A Clockwork Orange” scribe and terrific playwright Anthony Burgess actually derided the centuries-old habit of using rhyming couplets as “conventional, unpoetic and arhetorical,” in a criticism of Moliere, and astutely pointed out that they are “not available for the special expressive purposes of any individual character.”

Burgess’ grumblings prove a truism in this case. In “The School for Lies,” every character but one (Gudahl as the oafish Acaste), no matter how stupid, has the God-given capacity to rhyme as well as the next. The wordplay, though surely competitive, rarely shifts power or indicates supremacy of intelligence. Unless, of course, we’re speaking of the intelligence of Ives, who is undoubtedly the smartest character of his own play. The best patter, a back and forth between Celimene and Arsinoé over gossip and hearsay, deftly navigates the unassailable strength of language. There just aren’t enough other scenes like it.

The humor of Act One is overwhelmingly dependent on a collective “What is he gonna rhyme with that?” from the audience, which outlasts its initial thrill. But in Act Two, I kid you not, everything improves, I dare say skyrockets, to comedic amazement: the script, the acting, Barbara Gaines’ direction. Everything gains gobs of engaging dynamism. (Susan Mickey’s campy, garish, mindbogglingly ornate costumes and and Dan Ostling’s velvet sea-foam-green set with its grand chandelier are consistently brilliant.) So, while the first bite is unquestionably wonky and dull, the taste that lingers is absolutely resplendent. Especially the acting company, many of whom (the innocent and blissful Heidi Kettenring, and Sean Fortunato, adorably exploring his femininity) are giving their best performances in recent seasons.

I last saw husband-and-wife actors Carlson and Hay play Benedick and Beatrice in “Much Ado About Nothing” at the Canadian Stratford Festival this summer, a venue where the two performers are seasonal regulars. There is something to be said about real-life spouses playing onstage lovers, even bitter ones. Frank and Celimene come alive with a zinging chemistry, and their physical humor with each other, as expected, is completely unrestrained. Carlson (as many Chicagoans will recall from his stinging 2006 “Hamlet”), in particular, has a facility with doing justice to the madcap pace of language, while still keeping every single syllable crystal clear. Of all the performers onstage, only Hay and Bergan as the spidery, treacherous Arsinoé manage to capture the social class of their characters, making their deceptions and antics in this play about the folly of respectable society all the more decadent. (Johnny Oleksinski)