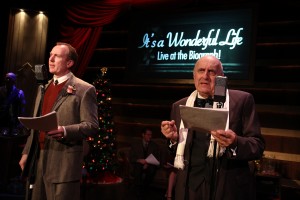 Near the end of American Blues Theater’s “It’s A Wonderful Life: Live at The Biograph!” one of two annual radio-play renditions of the Frank Capra film currently in Chicago (the other belongs to American Theater Company), my gaze naturally wandered to the title sign upstage. At this point in the performance, George Bailey had been experiencing the world he once knew with a significant addendum: he’d never been born. On Christmas Eve, wandering the streets of Bedford Falls, his lifelong home, George discovers every person he touched in some way is in a far worse place without him there—void of his generosity, his openness and beautiful spirit. All the while, I kept on staring at that sign: “It’s A Wonderful Life.”

Like so many pieces of holiday iconography, come December the masses rattle off that title in the same manner in which they watch the movie, habitually. But during that moment, I was so moved by the simplicity and optimism of those four quick words, not appended by any negating qualifiers. In difficult times of personal loss, national tragedy or even an unshakable moody rain cloud, a message so gleaming is tough to embrace and even tougher to believe. As twenty-four-hour news networks roll endless footage of our greatest fears, positivity has been rendered abrasive and, at times, inappropriate. With a big heart, this short-and-sweet production offers a much-needed reminder that simply being alive is the most precious gift. And a gift that is perfectly all right to celebrate and cherish.

“It’s A Wonderful Life” succeeds as a radio play by illuminating its story, rather than appeasing our vivid memories and perceptions of the classic film. Sure, when George (Kevin R. Kelly) offers Mary (Gwendolyn Whiteside) the moon, images of the movie naturally flood the mind’s eye, but director Marty Higginbotham’s relatively sparse production emphasizes the universal message and timeless themes over glorifying a nostalgic American past. In that endeavor, the well-known tale has unexpectedly acquired new layers. Allowing the transformative John Mohrlein to play both guardian angel Clarence Odbody and the cold and emotionally decrepit Mr. Potter, enables these typically flat, good and evil characters to become fleshed-out persons.

Some glimpses of artifice do remain in the frame narrative. The radio broadcast is set at WABT, onstage at the Biograph in 1944, so that means cheesy jingles and sing-along Christmas carols abound. Still, messages from the audience to loved ones read aloud in the interim are a welcome, teary-eyed addition to this beloved holiday parable, given new uplifting life once again by American Blues. (Johnny Oleksinski)