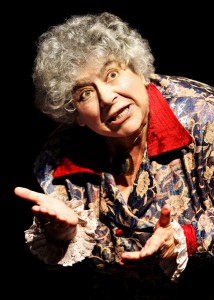 When we think of Charles Dickens, often we only remember Ebenezer Scrooge’s life-affirming nocturnal journey, or SparkNoting “Great Expectations” in high school. This year marked the 200th anniversary of Dickens’ birth, and many publications ran tributary articles about his life’s work and several publishing companies re-released his novels with contemporary cover art. None of those can quite compare to Miriam Margolyes’ eccentric one-woman show about Dickens and his most colorful female characters. This show seems intent on pointing out how the various, and mostly silent, women in Charles Dickens’ life really shaped his work. “Dickens’ Women” makes its final stop at the Chicago Shakespeare Theater after a ten month tour.

Researched and carefully curated by legendary stage and film actress Miriam Margolyes, “Dickens’ Women” seamlessly weaves in and out of dramatic interpretation and exposition concerning Dickens’ fiction and life. Margolyes’ script focuses on the dark nature of Dickens’ struggle to overcome poverty and artistic fulfillment. More than just an animated history of his life, this show almost seems like a live-action essay. The author does a great job of supporting the claims made about Dickens’ personal life by backing up her analysis with famous, and even some lesser-known literary scenes. At times, the characters can run together, but it’s when Margolyes taps into the real comedy or the dark depths of the text that she shines the most. In reading Dickens, readers can often miss his skewering sense of humor, but it’s recreated here tirelessly.

“Dickens’ Women” does not cater solely to scholars. In fact, Margolyes styles her monologues in a way that assumes everyone is as familiar and confident with his work as she is. It’s probably not a stretch to presume that general audiences at the Chicago Shakespeare Theater have at least seen a BBC movie version of one of his novels. When Margolyes eventually gets to a character or a reading that is memorable, it’s unbelievably satisfying. The second act opens with a scene from “Oliver Twist” between the beadle and the keeper of the workhouse; Margolyes plays both parts perfectly and really dives deeper into the scene than most English teachers could get.

This piece may not be as effective without Miriam Margolyes’ candid sense of the audience and intense dedication to the project. She takes complete control and speaks with such force that it would be impossible not to pay attention. Whether you’re a fan of Dickens or entirely unfamiliar, there’s a little something for everyone in this show. Just like any of Dickens’ novels, it’s a wonderful balance of heart, contempt and comedy. (John J. Accrocco)