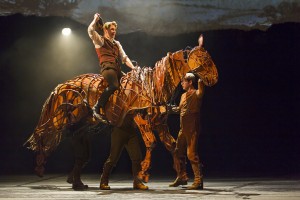 The stage version of author Michael Morpurgo’s children’s novel, “War Horse,” was met with mostly yawns and complaints about the show’s length on Tuesday night at the Cadillac Palace Theatre, where it opened in an oddly concise three-week run. A widely admired work of flash and heartfelt sentiment on Broadway, this national tour falls far short of its visually inspired original production’s ability to captivate and elicit big emotion from an audience. Now, the show drags along and underwhelms at every not-quite-happy-not-quite-sad lap.

What has changed? For one, it is constricted by a flat proscenium arrangement. The 2011 Tony Award winner for Best Play (originally directed by Marianne Elliott and Tom Morris) enjoyed its adolescence at the National Theatre of Great Britain, a curved thrust stage forcefully jutting out into the audience—the same distinctive set-up of its Broadway home, the Vivian Beaumont Theatre at Lincoln Center. Director Bijan Sheibani has adjusted the original staging somewhat, but his alterations are limited to unfortunate reductions in scale. “War Horse” simply doesn’t befit a venue-to-venue tour. The herd of horses still trots in faraway circles and the thirty-four-person ensemble is huddled into distant upstage corners. With those inconsiderate restrictions, the show is adequately playing to, perhaps, the first ten rows of the massive 2,344 seat theater.

I last took in “War Horse,” a supposed thoroughbred of British theatrical ingenuity, shortly after it opened to near universal raves on Broadway in 2011. While its script,  a World War I boy-and-his-horse coloring book, by Nick Stafford—among the weakest British imports in recent seasons during a veritable renaissance for UK playwriting—was a stupefying, convoluted mess, the puppeteering was, as you’ve probably already heard, heart-pumping and exhilarating. Every miniscule twitch, distraction, joint and step was performed with a surgeon’s attentiveness by the two-or-more actors manipulating each puppet. And everybody ate it up. The ongoing hoots and aw’s among the crowd were those of an enrapt audience with a certain fondness for equestrians. Some of that wondrous mood carries over. The puppeteering in Chicago remains undeniably impressive, but it relinquishes much of its luster after the first fifteen minutes or so because of the audience’s unfortunate physical detachment. 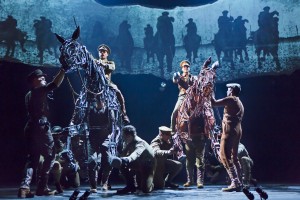 The stagecraft—with masterful and wiry Trojan horses by the Handspring Puppet Company and Paule Constable’s amber, hazy lighting—was once magnificent and wholly engaging, but has since lost its sense of innovation. At the Cadillac Palace, John Owens’ sound design makes Adrian Sutton’s sweeping cinematic score feel disparate and noticeably pre-recorded. Karen Spahn’s new lighting loses to the theater’s blinding exit signs. The big upstage pikes and pillars of Rae Smith’s set are gone, leaving an awkward black curtain in their place. There are few legitimate thrills (and an irksome cacophony of live gunshots) other than a sole breathtaking sequence that has our friendly foal, Joey, all at once become a great big horse, a heart-stopping moment of  inspired collaboration.

“War Horse” is dependent on the thriving emotionality of its spectacle in many moments just like that one. The story (now a major motion picture by who else but Steven Spielberg) takes young Albert from Joey’s stubborn first feeding, through the treacherous muck of wartime trenches, losing good pals like Billy (Michael Wyatt Cox), and returning safely back home to England—in an ill-conceived final image that makes the play squarely about Albert and his mother. It is an expansive, epic story that requires little from its hefty company of actors, many of whom are inflating the size of their characterizations to “Duck Soup” for ready-made laughs. As the young Albert Narracott who sneaks off to war after his drunk father loses his horse in a bet, Andrew Veenstra is consistently endearing and likable in the only role that goes anywhere. Portraying his snappy mother Rose, Angela Reed seems a touch too young, at times reaching effortfully for maternity. The cavalry of puppeteers do admirable, strenuous work, but the script and space thwart their unquestionable artistry. There are some other characters, but they exist only as a means to a sappy end.

It’s hard to believe this play was a knockdown, drag-out smash hit only a year ago. With all the shoved-in design elements and steady-as-she-goes tonality, I wouldn’t have been surprised to discover this production was a decade old or more. Considering the markedly quelling enthusiasm, it would seem as though Stafford’s play isn’t proving the unstoppable work horse everyone and their jockey thought it to be. (Johnny Oleksinski)