by Brian Hieggelke
December 20, 2012Filed under: 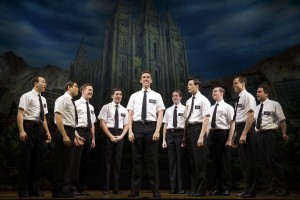 Growing up next to the only Mormon church in Joliet, I was remarkably ignorant of what the faith represented, knowing only that they were not “true Christians” according to what I’d been taught in confirmation class by my Lutheran pastor. I have only two tangible memories from all these years of proximity: one, that the parking lot would fill up at what seemed like odd times, not necessarily the Sunday morning that filled “normal churches.” The other, was a couple of girls who’d smoke in the farthest corner of the parking lot, which happened to be closest to the driveway where I’d shoot baskets. Somehow I already knew how transgressive these “fallen” Mormons were.

The Mormons I got to know when I went to work at Goldman Sachs right out of school were anything but fallen. The whisper around the office was that the firm’s partners liked to hire them because they were clean-living, hard-working and very procreative. (Family obligations reduced attrition; only a fool would shed the golden handcuffs when he had mortgages and tuition on his plate.) The guys I knew stepped directly out of a “Leave It to Beaver” rerun with their Boy Scout shirts on. I’ll never forget the time that one of them joined us at a boozy sendoff of a graduating trainee and drank a Diet Coke—or at least took a swig—and practically danced on the table afterward.

It’s that breed of Mormon, the scary nice, that “The Book of Mormon” sends up so deliciously in a portrayal that seems as much about the absurdity of organized religion and the folly of colonialism as an indictment of the LDS. The creation of Trey Parker and Matt Stone of “South Park” fame, along with Robert Lopez, the co-creator of “Avenue Q,”  “The Book of Mormon” opened on Broadway in 2011 and instantly became a cultural and box-office juggernaut, winning nine Tony Awards (including Best Musical) and consistently selling almost two million dollars in tickets each week. This touring version shows signs of similar juggernautery in Chicago, where it just opened a sit-down production at the Bank of America Theatre and has announced a run into next summer with sell-outs through the winter.

I suspect that those audiences will feel they’re getting their money’s worth since, for what it is, it is a near-perfect show. The story of two young Mormons sent to do their obligatory missionary tour of duty in a hell-on-Earth called Uganda, who find themselves in a role reversal as the clueless ne’er-do-well Elder Cunningham (played with charm to spare by Ben Platt in a performance that channels Jonah Hill) rises to the occasion, sort of, and golden boy Elder Price (Nic Rouleau dashingly earnest in a role he also played on Broadway) falls hard from his pedestal. This musical exquisitely riffs on references at every level, whether in the book, the music or choreography. Want a surefire laugh? Throw in a random “Star Wars” or “Hobbit” reference. It kills, apparently. Though it’s most definitely a meta-musical first and foremost, it soars because it stands on its own as a great bit of song, dance and story. And there is some nifty substance floating around as well, about what constitutes credibility in the miraculous realm of religion, and what the creation of a new religion in our time might look like. For some reason, supernatural acts seem more valid when they occur in far away places a long time ago. The rub on Mormonism, “The Book of Mormon” seems to suggest, is in part due to its origins’ proximity to us in time and place. After all, we call religions made in America cults. 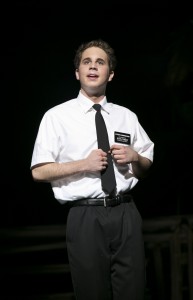 Fans of “South Park” are likely to feel at home in the show’s trenches of humor—though the humanizing of Jesus, for example, is an old joke to television watchers who recall the battles with Santa Claus of years past, it’s still funny when the Son of God calls a guy “a dick.” But it is Casey Nicholaw’s choreography of the all-male Mormon missionaries that really makes the show sizzle. Packed full of over-the-top quotations of dance moves that will be familiar to anyone who’s seen a musical or even a drag show, I couldn’t decide if the show’s creators were just making a big joke about how gay musicals are by making these guys move like the girliest straight men ever or, perhaps, making a subtle comment on the Mormon Church’s well-documented hostility to gay rights by suggesting that the church is packed with closeted queers. Probably both. Or perhaps they just see the LDS as blessed with out-of-control libido, as the hilarious sexualization of a baptism scene suggests, equating rapture with orgasm. With bits about fucking babies and fucking frogs, there’s seemingly no limit to their phallic frolicking. As you might guess, there’s a nonstop mess of jokes, references and ideas at work, and Nicholaw and Parker, who also direct, manage to keep it all moving fast and clever.

Though clearly not an official work of church propaganda, “The Book of Mormon” cuts with a butter knife, becoming in effect another part of the mainstreaming of what was once a marginal religion so mysterious to me in my youth. Polygamy and official discrimination against blacks are behind it now, and perhaps its war against gays will give way to the force of history before long. “The Book of Mormon” seems to imply as much, treating the church as something silly and benign, rather than a flag-bearer for the darker sides of American Conservatism and a force for the marginalization of minorities. And All-American, treated with irony in the show, but a virtue for so many that it almost gave us a president once known as Elder Romney.

As much as I admire “The Book of Mormon,” I do not share the universe’s unconditional love for it. I feel a little like Elder Price right after he suffers a particularly heinous injury and suffers a crisis of faith; as much as I’ve laughed at their work over the years, I’m just not a true believer in the Trey and Matt brand of humor. It’s a risky thing to admit, since their jokes, in their biggest strokes, depend on shock value, on how willfully they squeeze “untouchable” subjects. To suggest that this kind of thing gets old is to risk being called old. Or worse, a prude. It’s critic-proof that way. So when Elder Price dreams of Mormon hell, seeing a very fem Hitler in sequins seems like something I’ve seen before. But how about if Jeffrey Dahmer does the anal nasty with Price’s father in a dance number? How edgy. Ha. Ha. Ha.

The portrayal of Africans as gullible buffoons unable to stand up for themselves without a white man to lead them will shock no one. After all, that’s the way our culture has long portrayed black people. I get that we’re being fed a message about the parochial impotency of Bible thumping in the face of genocidal warlords, and certainly the Mormon missionaries are not superior beings in any way, but I find it hard to do the knee-slapping about AIDS and female genital mutilation that underlie much of the humor. If it’s not funny to joke about a couple dozen dead six-and seven-year-olds in Connecticut, I wonder why it’s hilarious that nearly a hundred-million African children are being brutally mutilated, often fatally? (The same impulse that make dead Iraqis and Afghanis not “count” either, perhaps?) Of course, you could argue that a few million Americans have at least some modicum of awareness of the crisis now, thanks to this show’s success. Is this the only way we spread our news in this post-newspaper age? The creators have an answer to this as well, embodied in the song “Turn It Off,” which parodies our penchant for denial of any and all of life’s greatest horrors. That’s the brilliance of this show: it knows its own vulnerabilities and makes fun of them in advance. Critic proof?

So “turn it off, like a light switch just go click!” If you can, you’re going to really love this show. (Brian Hieggelke)