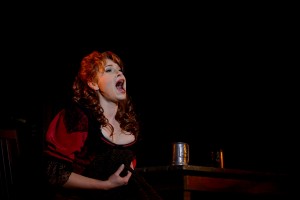 Consider yourself at home with Light Opera Works’ short-run production of “Oliver.” Disguised as community theater, “Oliver” is every bit up to the high standards set by this company. A delightfully vibrant and talented cast make this show worth the commute for city theater-goers. A full orchestra and decidedly dark staging make this show aesthetically pleasing as well.

For many, the idea of singing and dancing children can be nauseating. A show like “Oliver” inherently comes with such misconceptions. What’s surprising about this show is that after the ever-popular “Food, Glorious Food” number, the show primarily focuses on the flawed adults rather than the gamin they’re supposedly helping. Dickens’ twisted sense of irony is thoughtfully paired with upbeat show tunes of the old school and thankfully performed by adults. Director Rudy Hogenmiller makes a wise choice by casting the roles on the somewhat-older side, as these actors possess the emotional range needed for this piece. In a standout performance as Nancy, Colette Todd (clad in an eye-catching red dress), spreads her intense bravado with everyone she shares scenes with. Her soaring voice certainly doesn’t hurt either.

With all the unavoidable buzz about “Les Misérables” this holiday season, it’s interesting to reflect on “Oliver,” another classic musical. The similarities in theme and format are striking, only it seems that lyricist Lionel Bart fully embraces Dickens’ cheeky humor while not foregoing the grittiness of life on the underbelly. The 1968 film version of “Oliver” was the last musical to win best picture before “Chicago” in 2002 and the two films are incomparable in style and theme. As audiences prepare for “Les Misérables” and reviewers begin to pan this return to the classic movie musical format, it’s at least refreshing to see it done well on stage. (John J. Accrocco)