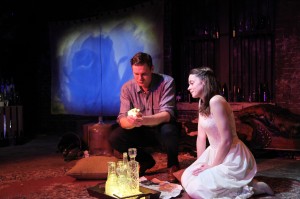 Has ever a writer loved a character quite so much as Tennessee Williams loved Laura Wingfield? Love is an impossible quality to quantify, try though eHarmony might, but as anyone who’s cried during the final minutes of “The Glass Menagerie” can attest, Laura and her playwright share a most special bond. I think it’s the transmutation of Williams’ affection for Laura into romantic, dramatic, blissful onstage tension that makes her my favorite character of the entire American canon.

While popular theater culture is fixated on deservedly iconic actresses playing wilting Daughter of the American Revolution, Amanda, I immediately crave to learn who is tackling the emotional paralysis of young Laura, whose imperfections are nothing short of perfect in my eyes. In Mary-Arrchie Theatre Company’s new “Menagerie,” Joanne Dubach’s magnificent Laura is driven not by awkwardness or an exaggerated physical disability, but immense kinesthetic fear of social inadequacy. She speaks not quietly or with a weird affectation, but hesitantly as though the words might unexpectedly manifest themselves as vomit. It’s a keenly relatable nervousness we all feel, though crippling for Laura. The actress’ carpet scene with the Gentleman Caller (the All-American and wholly sincere Walter Briggs) is coy, sublimely subtle and magical.

In Williams’ semi-autobiographical play of memory, the four characters are amplified by time and bathed in a light both sage and reactionary. The recollections of Tom, one of Williams’ many theatrical doubles, begin calmly and poetically, but descend into anguish and regret the closer he approaches his eventual running. Mother Amanda’s—Maggie Cain’s forced Amanda rings false, her desperation played as lesser than that of her children, and her humor, buffoonish—adoration of Tom and Laura is remembered mostly as irresponsible and cruel nagging with only small glimpses of the love she must have felt. Tom is defined by his regrets and his inability to change the past; he can only view it. But Laura, introverted, mousy, stubborn, even somewhat deceptive, is shown as the pinnacle of human virtuosity.

Director Hans Fleischmann (also playing Tom) has flung himself at the “memory play” notion and imposed a single primary concept within his production. Rather than a narrating merchant sailor, as in Williams’ text, selfish dreamer Tom is now a bearded homeless man. The “sentimental” events of the musty, old-world St. Louis apartment instead materialize around an alley like the one the Wingfield home overlooks, surrounded by liquor bottles, rugs and crates assembled into a tramp’s outdoor residence (Grant Sabin’s set would be ideal for a particularly spare “La Boheme”). Fleischmann’s frame story succeeds on a literal level, but relinquishes much of the play’s (and Tom’s) ambiguity and forward motion.

In his final monologue, Tom reminisces “I would have stopped, but I was pursued by something.” That something being these memories. As he lounges about his asphalt landscape, barefoot and always lit askew from Laura, Amanda and Jim, the fantastical visions of his family come across as the sad delusions of a drunk, emphasized by the striking presence of a factory’s worth of bottles. Tom appears to have been “stopped” for some time, comfortable even, and the audience is left wondering how he arrived there rather than pondering where he’s going next. This decision does no harm to Laura’s story (her candles optimistically don’t get blown out at Mary-Arrchie), but Tom’s reads like a dramatized obituary. The end of the line for “Shakespeare.”

The two halves of the play are delineated here by contrasting staging. In Scenes One through Five, the characters do not look one another in the eye, each one inhabiting a different area of the stage and acting presentationally. During Scenes Six and Seven—The Gentleman Caller being, as the text states, “realistic”—the characters begin to interact naturally. The director’s choice is an intriguing idea, but slows down the first half of the play and unintentionally lends Amanda a dictatorial air all while contributing no emotional texture.

Where the concept and stylized touches absolutely flourish, however, is in the design. Fleischmann has wisely included a feature that Williams originally wrote (and much later published), but nixed during the play’s original productions in Chicago and on Broadway in favor of the innate power of acting: projections. Brechtian titles like “The Opening of a Door! ” with the distinctive mood of a silent film, images of Laura’s high school nickname—Blue Roses, the wide-smiling portrait of the Wingfield patriarch among other visuals jump onto an upstage screen. The imagery is stunning.

Williams was among the few playwrights of his time suggesting projections, and Anna Henson’s design forms a marvelous symbiosis with the downstage action and Daniel Knox’s melancholic score, evoking greater profundity than the usual faraway circus tunes. Matthew Gawryk’s lighting design stays in a constant state of flux, utilizing a vibrant color palette and nifty phosphorescent glassware that bolts around like lighting. These visual delights manage to support both Fleischmann’s concept and Williams’ play, but the moment Jim and Laura take their place on the floor, the conceptual artifice evaporates, leaving only two superb actors onstage living beautifully. (Johnny Oleksinski)