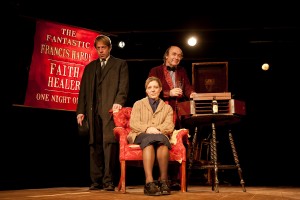 TurnAround Theatre’s acclaimed production of Brian Friel’s “Faith Healer” has been remounted by The Den Theatre—that is, if you can call this somber, intimate revival a remount. The production did not begin its life as early as this past summer or fall. No, the original staging occurred in 1995, eventually relocating to Steppenwolf as the inaugural outing of its then-brand new Upstairs Theatre. J.R. Sullivan, the production’s original director, and the complete original trio of actors are back in this nicely aged reincarnation, alive with pathos.

It’s impossibly difficult to process that these same three actors delivered Friel’s monologues seventeen years younger than they are today, for in 2012 they are rife with textured maturity and a certain kind of gravitas that only comes from a few additional birthday candles. Each actor is an ideal match for his or her respective character. Even Si Osborne, who has the least compelling of the three performances, captures Frank’s enigma and unassuming shyness, enabling the other two performers to resurrect the faith healer.

Frank Hardy (Si Osborne), that Fantastic Faith Healer, starts the play by muttering the villages he’s toured with his wife Grace (Lia D. Mortensen) and lisping manager Teddy (Brad Armacost) as though an incantation evoking foggy images of the group’s turbulent past. Magical things have happened along their journey—the miraculous healing of an entire room of ten people amidst the gentler joys of untethered youth—but so too has tormenting trauma and horrible loss. We find each person in the play, whether jovial or neurotic, an exhausted shell of their younger self, still haunted by their years spent roaming Ireland in a van. Each person’s recollections of the events, as in life, diverge slightly. Like the healing itself, the actual events of the story are a matter of faith.

In 1979, the prolific Brian Friel wrote a far more palatable play in “Faith Healer” than he did with the ever-popular “Dancing At Lughnasa.” Though “Faith Healer” is surely depressing in sections, each character bellows an individual, booming voice rather than the usual mask of quintessentially Irish sorrow or countrymen’s pastoralism. After all, Frank is the only through-and-through Irishman of the pack, according to him anyway. Frank claims that Grace, residing in London during her monologue, is a “Yorkshire woman,” but she asserts she was born in Northern Ireland. And Teddy, a born showman, has an East Ender cockney twang betraying a jolly merchant smarminess. Friel decisively crafts all his characters’ regionalisms and eccentricities with flair and unrelenting soul. 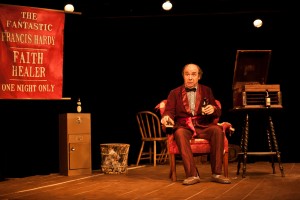 The thunderous Armacost plays Teddy like a ringmaster with a sinister charisma. The actor benefits from his character’s charm and requisite comedic relief—Frank is drab and Grace is deeply troubled—but Teddy’s emotional arc is pure and hard-hitting. The manager’s enduring love for his compatriots and their past together is a devastating reminder of mortality of life and friendship. During the initial run, Armacost won a Jeff Award for his performance, and I suspect he will be a formidable contender again this year. Mortensen, who directed The Den’s supremely honest production of “The Quality of Life” earlier this season, lends Grace a fidgety stress as she smokes away her cigarettes. Perhaps because she is the only feminine presence onstage, I found myself placing most of my trust in Mortensen’s Grace.

Clocking in at nearly three hours, one does become aware of the performance’s length near the end. Frank’s final monologue that, much in the spirit of this play, does very little actual wrapping up, relaxes on a melancholic plane for too long. But it is the inundation of rich detail throughout all four monologues that causes “Faith Healer” to linger so ethereally. When I close my eyes I can visualize Frank in a dusty monochromatic church with cracked windows. I can see Gracie sitting in a modern, over-bright London flat, and Teddy lounging about a stuffy velveteen parlor crawling with artistic dogs. In the physical production, there is never more than a few chairs, a side table and a traveling red flag (set by Henry Behel). All those vivid images I recall are summoned by the actors’ skillful storytelling, proving that in its first full season, The Den Theatre is carving out a smart niche as a haven for sophisticated, mature and, above all else, honest performance. (Johnny Oleksinski)

At The Den Theatre, 1333 North Milwaukee, brownpapertickets.com. Through February 3.