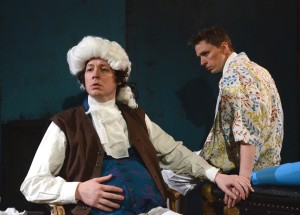 “Uneasy lies the head that wears a crown,” not to mention the much less holy head that governs in the name of the crown. I believe that little piece of Shakespearean wisdom sits at the core of Sean Graney’s new play “Sugarward,” which opened on Saturday night at The Side Project, but I cannot be entirely sure. Frankly, I am still somewhat perplexed as to the play’s plot, which is unbelievably convoluted and directionless for such an intimate, two-person (four-character) comedy-drama. The playwright’s laborious, heightened speech detailing a smattering of issues of eighteenth-century British imperialism—the morality of slavery, the limitations of the governorship, the Triangular Trade—is impossibly difficult to follow and hard to enjoy.

Colonel Daniel Parke (John Henry Roberts) relocates to the British Leeward Islands to act as governor, and immediately finds a flock of people eager to speak with him. Actor Joel Ewing plays three British characters of the islands, in typical Graney fashion: his manservant Thomas Kirby, a haughty old gentleman and former governor called  Christopher Codrington Jr., and Edward Chestor, his antagonizing nemesis. Parke’s interactions with these individuals have very little to do with relationship or mobilizing the narrative, but get stuck in the muck of over-intellectualized ideas. The play (directed by Geoff Button) occurs over four years, in which Parke unilaterally bolsters his own power.

Having Ewing adopt a triple personality only confuses the story more and contributes some early sight gags. The actor switches between the characters easily with some occasionally unidentifiable dialects. But his expressions and traits are exploded and overplayed, so when “Sugarward” suddenly becomes a serious drama, the audience refuses to engage with it as anything more than silliness. Roberts’ Colonel is a mousey, introverted man with lofty ambitions and middling moral fiber. Graney gives him a few rhetorical thoughts to consider, a penchant for sculpting clay statues, and a final punishment that feels all too inevitable, but the character’s arc is underdeveloped.

The imperialist subject matter and location is intriguing, and could perhaps amount to a more coherent work in the future. I recently toured a British plantation in Jamaica, and was struck by the incongruousness of its existence among cruise ships and crumbling roadside shacks. The problematic present-day political situation in Jamaica can trace its roots back to fine state rooms such as the one here. However, as it stands, “Sugarward” does not embrace imperialism as dramatic subject matter; it drones on about it ad nauseam. (Johnny Oleksinski)