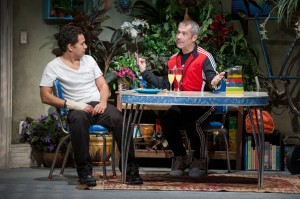 Fresh on the heels of the positively seismic “Good People,” a masterfully rendered class commentary that took a company on Halsted back to its gritty roots, Steppenwolf Theatre enters the new year with Stephen Adly Guirgis’ “The Motherf**ker With The Hat,” which opened on Sunday night in the Downstairs Theatre. A much less successful offering, Anna D. Shapiro’s production (Shapiro also directed the play on Broadway) is content with creating “Motherf**ker” as a frivolous comedy. At times, it is.

But Guirgis’ characters are firebrands who wear their emotions on their sleeves. They employ a brinkmanship strategy on domestic violence, they curse, they implode, they kiss and make up and then start all over again the next day. Sure, the extremity of the proceedings is hilarious (here, only somewhat funny), but the actions and attitudes are also enormously destructive to each and every character onstage. Very rarely does anybody come down from their impassioned high, especially on this day when a series of uncovered infidelities calls every friendship and romance into question.

However, Shapiro’s cast plays the big emotions with confounding restraint, comic mugging and fake tears. Perhaps the abundance of humor gets in their way for building believable people, but the laughter need not be a barrier. It is a byproduct of intensity. Comedy and tragedy exist on a similar plane of intensity and high stakes, with one usually involving more death or depressing existential crisis. The other might encompass backstage hijinks, two roommates in fervent opposition, or a servant who finds himself with two masters. Whether Oscar is holding a plate of spaghetti, poised to pummel it at Felix’s pristine wall, or Macduff is wielding a broadsword, about to chop off Macbeth’s head, in that tense moment, the risk should be equivalent. Humans are petty that way.

“The Motherf**ker With The Hat” could perceivably involve some death, itself. Jackie (John Ortiz), the play’s main character, is an ex-convict who discovers a man’s hat on his door-side table. Presuming the hat to belong to a mystery fellow sleeping with his girlfriend Veronica (Sandra Delgado), he goes on a pithy rampage, seeking counsel in his Alcoholics Anonymous sponsor Ralph D. (a perpetually relaxed Jimmy Smits) and his effeminate cousin Julio (Gary Perez). Late in the play, Jackie points a gun point blank at another character’s head. The crowd reacted with ambivalence. Shapiro’s kindly staging establishes a world where deadly violence cannot happen, and Matt Hawkins’ fight choreography spends more energy protecting the actors than creating an illusion of danger. 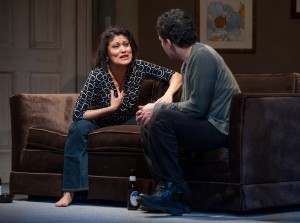 Two actors in the company understand the nuances of Guirgis’ unremarkable but enjoyable play inside and out. Perez owns the bulk of the play’s humor—after he offered Jackie a “virgin mimosa,” I was giggling on and off for the next ten minutes—but his character is also equal parts sensitive and pissed off. The actor embodies both with believability and an investment beyond a jokey affectation. The other is Sandra Marquez, playing Ralph D.’s wife Victoria. Aside from a fleeting kiss, Victoria is the only through-and-through victim of the play, and Marquez slowly unravels an initially humorous defense shell to reveal a woman desperate and traumatized.

The real motherfucker though is Todd Rosenthal’s set, the mechanics of which have the smoothness of a theme park ride rather than the grit and tackiness the play would atmospherically so benefit from. The transitions from room to room (none of which resemble actual New York apartments) are impressive, but their ease purifies a seedy environment. Another twelve feet or so of the design is devoted to an imposing, vacuous space above the usable set, littered with a fire escape and a huge skewed billboard frame. Rosenthal’s excessiveness gives the actors very few places to go, and Shapiro’s staging correspondingly lacks dynamism. (Johnny Oleksinski)