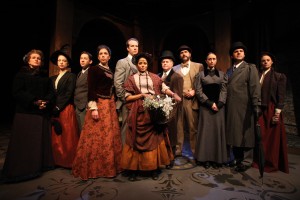 If you’re familiar with the beloved musical “My Fair Lady, ” you’ll need no introduction to the BoHo Theatre and Stage Left Theatre collaboration on George Bernard Shaw’s “Pygmalion.” Probably the most surprising aspect of this classic source material is just how much of Shaw’s unaltered script appears in “My Fair Lady.”  While devoid of chipper musical numbers, “Pygmalion” is Shaw’s charming, timeless send-up of Victorian London society.

“Pygmalion” is perhaps Shaw’s most popular work and thematically it isn’t hard to see why. It’s a somewhat classic story of pride and prejudice, but unlike the famous musical, it ends on a rather ambiguous note. With so much philosophical rhetoric on what speech says about class distinction, it becomes an interesting jab at the shallow values of the upper society. Prejudiced Higgins isn’t even liked by his fellow one-percenters, but takes an especially harsh look at Eliza throughout the whole play. In turn, Eliza dislikes him profusely, but because of her humble nature forgives him since he doesn’t know any better. Shaw’s ultimate goal is to show that the people of the lower class are actually more civilized and open-minded because of their station in life. Another theme briefly touched upon is the role of women in various levels of society and whether it’s possible for women to achieve financial independence from their husbands and fathers.

Beautifully staged at Theater Wit, director Vance Smith (of Stage Left Theatre) does a great job of making his production as visually artistic as possible. From the exquisitely detailed costumes by Theresa Ham and the damask-tinged backdrops by Eleanor Kahn, no embellishment is overlooked. What really makes this a worthy production is the cast. It would appear that the accents were something hit heavy upon during rehearsal. There’s not a sour vowel here, which is an appropriate attribute in a play about phonetics.

In the lead role of Eliza Doolittle, Mouzam Makkar does the none-too-easy task of essentially playing two characters. Like Audrey Hepburn in “My Fair Lady,” Makkar seems sort of uncomfortable as the flower girl but blossoms into the composed lady through very natural acting choices. By virtue of the script, Eliza is much stronger and much more fiery once she’s made her transition and Makkar does well in fully realizing this. Steve O’Connell plays the part of Henry Higgins with such devilish meanness that it’s nearly impossible not to hang on his every monologue, for fear of what horrible thing he’ll say next. Though there seems to be a considerable age gap between O’Connell and Makkar, there is no shortage of chemistry. Lisa Herceg makes a perfect, matronly Mrs. Higgins and her suppressed rage really supports the understated theme of women’s rights.

On the lighter side of the Shavian canon, “Pygmalion” is a quick, witty, verbal battle that never overstays its welcome. Clocking in at just under two hours, the show leaves much to consider and a bit of an intellectual hangover. The charming scene work created by this clever ensemble is surprisingly modern considering the hundred-year-old script. At times the monologues do become a bit heavy-handed, but they still remain accessible with plenty of laughs abounding. (John J. Accrocco)