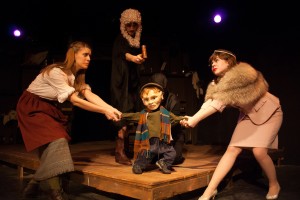 Brecht’s parable looks at class warfare, loyalty and the then-revolutionary idea that an adoptive parent might be more suitable than a biological one. Unfortunately, Promethean Theatre Ensemble’s dramatization lacks the visual flair and pacing needed to keep its audience from getting bogged down in the heavy-handed narrative.

Grusha (Sara Gorsky) works at the Governor’s (Tommy Venuti) residence during a political coup. When the Governor’s wife (a delightfully over-the-top Jennifer Roehm) leaves her child behind, Grusha saves him from the bloodthirsty opposition and searches for sanctuary.  But when Brecht leaves that thread to tell the story of charming rascal Azdak (Teddy Lance), the narrative switch confuses.