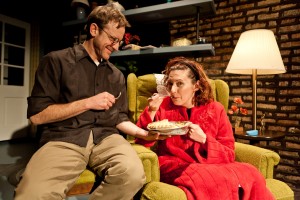 There comes a moment in a treasure trove of films starring the likes of Meryl Streep and Julia Roberts when a depressed, frazzled character wallowing in her own complacency, willingly or by happenstance picks up everything she owns and starts her life anew. Oh, how I envy her. From there, she eats, she prays, she loves, she opens a chocolaterie, she trades homes with an Englishwoman, and maybe she starts a diary to document her progress. Or, perhaps he moves into his friend’s abandoned train station or goes on a road trip through the California wine country.

Whatever the story’s groundwork, the Friday-night-with-Ben-and-Jerry’s “discovering yourself” genre infrequently wanders onstage, perhaps due to its unique lightness and knowing smile, the subtleties of which are so difficult to convey. Occasionally quaint, often romantic, these tales always resonate powerfully for those of us in a state of transition. Lamenting the theater’s reluctance to embrace these guilty pleasures, I was so pleased to discover that Lisa Dillman’s “American Wee-Pie,” which opened on Monday evening at Rivendell Theatre Ensemble, brings those recognizable, intoxicating themes to the stage. But for every one of the playwright’s successes—and there are many—another element falls short of this world premiere comedy-drama’s potential.


Tim or “Zed” (Kurt Brocker) returns home following the death of his mother, having absentmindedly spent the last nine years as an editor for a textbook company in Chicago. Upon arriving back in small-town Gardensend, the expressionless introvert is faced with that inevitable, ferociously awkward moment of reunion with a high-school acquaintance he barely knew. Only in “American Wee-Pie,” that friend, the forthright Linz (Jennifer Pompa), thankfully saves him from being killed by a car—the first of many fateful coincidences in Dillman’s play. Linz and her husband Pableau (Mark Ulrich, an overreaching however warranted French stereotype), own a posh cupcake shop in town called Le Petit Gateau. There, Pableau experiments with non-traditional baking ingredients—one such ridiculous flavor is feta pumpkin praline—and he is elated to learn that Zed has a hidden culinary palate as discerning as his own. During an unforgiving economy, Pableau takes Zed as his apprentice, Zed quits his lifeless job and moves back into mom’s old house. Easier said than done, right? 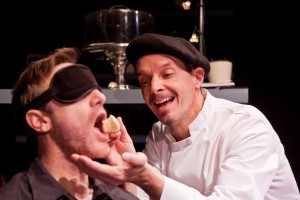 What Dillman perfectly crafts are the textures and layered dynamics of each relationship. Whether it is Zed’s remove from his bitter sister Pam (Jane Baxter Miller), or the siblings’ connection to their deceased mother, or even the comic Pableau and Linz’s coupledom, most every tie has a childlike purity that attracts you to this merry band of weirdos. That is, all but a few. Keith Kupferer plays a police line of secondary characters including Phil, a laid-off coworker Zed watched die of a heart attack, Malcolm, the nosy-but-warm postman and Pete, a smarmy burial property broker. Despite Kupferer’s kind performance, the roles’ integration—the guilt-ridden appearances of Phil’s apparition, in particular—feels hasty and crowds the central plot, which already is a meticulous web of job loss, small-business ownership and mid-life shifts over two hours. The play makes repeated mention, through Linz’s pronouncement or transitional audio (sound design by Josh Horvath), of a reality-TV show called “Cupcake Combat” that the dessert duo dreams of competing on. Regardless of its frequent inclusion, the play never actively pursues that thread. It just hangs there extraneously.

Megan Carney has directed “American Wee-Pie” with equal attentiveness to the play’s tone and its spatial fluidity. She transitions scenes simply by spinning a single door frame into different positions (Regina Garcia’s set is a delightful, kitschy antique shop), implying that our formative decisions first require taking that big step through the door. The acting company embraces this sense of optimism and renewed vitality in their performances, with Pompa’s generosity and Brocker’s awkwardness earning the most affection. (Johnny Oleksinski)