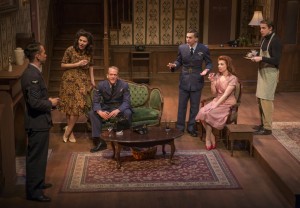 When Terence Rattigan’s chronicle of the lives and loves of British airmen debuted in 1942, England had been at war with Germany since 1939. While American audiences might view the piece as a stereotypical snapshot of steely British reserve, the fact remains that the Brits faced a very real end of days. Rattigan’s first-hand flying experience drives the peril home.

Newly divorced film star Peter (Paul Dunckel) hopes to resume his relationship with Patricia (Darci Nalepa), wife of pilot Teddy (Joey deBettencourt). Yet Patricia sees the cost of Teddy’s service and understands what her support means. The play captures the importance of honor and duty during an era with no time for cynicism.

Griffin Theatre Company’s production isn’t perfect; accents are all over the map. But fine performances abound; Mary Poole as a hotel concierge and Gabe Franken as a linguistically challenged Polish pilot routinely steal their scenes. While the dialogue may be a bit creaky, the theme of compassion and sacrifice during wartime remain timely. (Lisa Buscani)