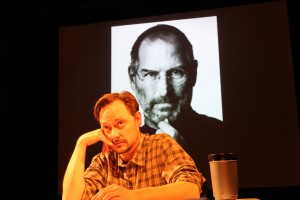 Nearly a year after the controversy surrounding monologuist Mike Daisey’s “The Agony and The Ecstasy of Steve Jobs” reached its pinnacle—a stormy timeline including, but not limited to, an official retraction from WBEZ’s “This American Life” and a canceled run at the Chicago Theatre—the play has been resurrected in a new, “ethically made” edition.

The original version’s discrepancies lay with a few of the performer’s firsthand experiences in Shenzhen, China—the employment status of a man with a mangled hand, proof of seemingly underage workers’ birthdates, Foxconn guards improbably wielding guns, etcetera—that were called into question after Daisey’s appearance on public radio. Those portions have been removed. You can leave your torches at home.

The thought on most theatergoers’ minds—for, once the “Agony” debate became yesterday’s news, Daisey resumed his role as a mostly theatrical entity—is “has the work been tarnished by all the outrage and hubbub over the falsehoods?” As I discovered at the 16th Street Theater, not really. When the house lights came up in the Berwyn space at the end of the monologue, audience members’ hands still nervously lurched into their pockets, eyes full of paranoia darting around to make sure no one actually saw them operate a cell phone. Daisey calls his monologue a “virus,” the information slowly infecting from person to person, and he is exactly right.

I cannot defend the five minutes of excised material from the original “Agony”; however I also can’t, with good conscience, condemn it. Having read many pages of available commentary as well as the transcript of “This American Life”‘s retraction, the entire situation continues to conjure a hefty amount of confusion on my end. But the information in “Agony 2.0,” here performed by actor Lance Baker, has been fact-checked, exhaustively scrutinized and corroborated by plenty of sources like The New York Times. Regardless, this is a theater review, not an exposé, and “The Agony and The Ecstasy of Steve Jobs” is an exemplary, hysterical, coyly mobilizing work of theater.

While criticizing all tech giants through the metaphor of Apple, one of Daisey’s most intelligent maneuvers is an open admission to his enthusiastic Apple fandom. In so doing, the writer establishes that he’s not a loudmouthed contrarian out to ridicule popular products. If anything, he’s a conscientious Apple user (possibly a former one) who watches the nightly news and reads the paper. His mentions of suicide nets attached to Foxconn factories in order to catch their jumping workers (this production uses projected images to reinforce the language) are not the yarn spinning of an embittered fabulist; they were well-reported events by news outlets. But it took a work of theater and a loud controversy to get those horrors some widespread attention. 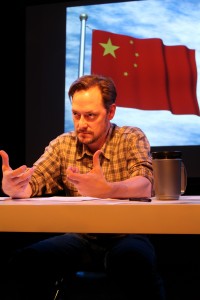 A year ago, the piece also came to the attention of actor Lance Baker, an avowed Daisey fan who performed “Agony 1.0” with a traffic light that indicated the factually accurate sections of the play. At 16th Street, he exudes simultaneously an insatiable curiosity and a wise world-weariness. Baker, sitting behind Daisey’s trademark wooden desk, also pays deference to the monologuist’s cool radio voice with its animated bounce and smooth depth. Though I am an admirer of Daisey’s usual writer-performer package (his “American Utopias” was among my Top 5 Shows of 2012), Baker’s likable, sly turn puts the spotlight on Daisey’s formidable writing abilities. Hundreds of miles away from his monologue, he’s still a damn good scribe.

I neither saw nor read the original “Agony,” but I can hardly imagine that the ethical version is any less profound, effective, poignant and hilarious than the critically lauded original. The juxtaposition of Steve Jobs’ life story—in which Daisey repeatedly and fairly acknowledges the man’s entrepreneurial genius—with the monologuist’s observations in China is a powerful, enlightening structure. Since Walter Isaacson’s biography was released shortly after Jobs’ death, the Apple founder’s fear-mongering in the pursuit of the ideal has become well known. That said, few of the revelations here truly shock, but what does shock is hearing these societal complacencies discussed aloud.

Summarizing the work, Daisey writes “there is no one out there in the darkness in the reach of my voice, no one watching me now, who came to this room tonight thinking, ‘China is a workers paradise.’ You knew.” We certainly did. Despite the piece’s shaky past, despite your opinions of its creator, despite all that, its central message of universal equity and workplace fairness is honorable and of the utmost importance to repeat. It’s one virus that’s worth spreading. (Johnny Oleksinski)