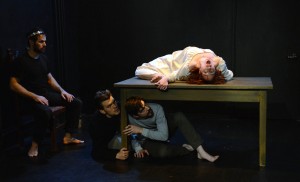 Do not go into “Lady M.” expecting a dramatically re-imagined “Macbeth.” “Lady M.” is, as a script, a rearrangement of the original text, a reprise without many new chords. Director Laley Lippard’s interest in the text is largely vocal, invested in the language of the original play and not in creative imaginings of the possibilities for the text. Inspiration for “Lady M.” comes from within “Macbeth” rather than from any genius outside Shakespeare. The adaptation of the piece re-sequences scenes from the original to create a Lady Macbeth-influenced perspective, but does not delve into the consciousness of that regal rage. Rather, we see the guise of madness through the energetic acting of Kristi Webb without a textual dive into the void. Elements that the director contributes to the stage seem clichéd and somewhat used up, such as surgical masks and overly boisterous buddy-buddy embracing. Even props seem to be an issue, as imagined and actual props appeared as a mixed bag without rhyme or reason.


Lippard’s time spent in the Scottish prince’s murky realm is rewarded, rather, through technical design aspects, such as the minimally designed and intriguingly integrated set changes, which in any other imagining would both be less integral to the vision, and the inspired lighting design by Jeff Glass, which creates tones and shades that the adaptation often overlooks. Similarly, the acting outshines the writing. Webb is particularly engrossing with her highly physical Lady Macbeth, though some of the subtleties of the character are, again, lost through lack of invention and introspection. Her activity makes up for this in several scenes, notably Lady Macbeth’s possession by the three weird sisters’ spirits—one of few successful changes by the adaptor. Her partner, Macbeth, is sadly tired, wearing out the part in the manner of one who does not convey new life to the language. Conversely, Mike Steele as Sister I and Doctor stands out in a side character for his unique portrayals of witchy creep and ill-fated king.

Many elements, such as Corey Noble’s performance as Macbeth, reflect the workshop-esque aspects of “Lady M.” Part of me believes that this work has still not left the rehearsal stage and could use tweaking. These losses leave me questioning, why wasn’t this what I expected? Why wasn’t this Lady Macbeth alone with her bloody thoughts and damn spots in a “psychological” adaptation rather than this lightly touched re-staging of a well-worn script? The psychology of Lady M. would seem a perfect examination to undertake for the black-box-minded director-adaptor, but somewhere, the boat tipped over with too much language love. If Lippard returns to her adaptation later, let us suggest a re-envisioning of moments in the vein of the possession and the manic Scottish dance, which enthralled with Lady Macbeth flapping around to the thumping and hurrahs of the men, rather than the aphysical language-centric attention currently placed on the production.  (Eric Shoemaker)