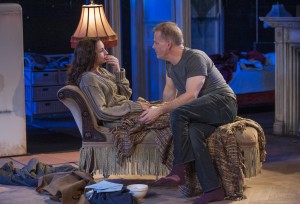 A night of tumult and passion or an average evening at home, lounging on the settee? In the case of “Skylight,” which opened at Court Theatre on Saturday night, the jury’s out on the matter. The text of British playwright David Hare’s 1994 play is rife with remarkable volatility and intellectual rigor. How could it not be? Hare has conceived two multi-generational adulterous (and tipsy) ex-lovers as the mouthpieces for his political conjecture. Sparks fly in the synopsis.

But director William Brown’s production placates the drama, landing on a casual atmosphere of monotonous awkward small-talk and the garlicky aromas of simmering pasta sauce, rather than those integral simmering tempers and libidos. So, when the duo’s anger does begin to escalate near the end of the two hour forty-five minute play, the aggression is difficult to believe.

The sharp, young Kyra (Laura Rook) receives a startling visit from her ex-lover’s son Edward (Matt Farabee) in the play’s first scene, regretfully informing her that his mother Alice has died of cancer. Although Kyra had a six-year affair with Edward’s father, she was close with the teen and his mum, residing with the family years earlier. This initial moment as well as the final scene with Edward—Hare’s play being typically cyclical—are the truest of the production. Though Edward admits to being “a real shit,” Farabee’s portrayal is marked by the same genuineness so prevalent in his performance in “Elizabeth Rex” last season at Chicago Shakespeare. And the connection between Farabee and Rook here is palpable and kindhearted. 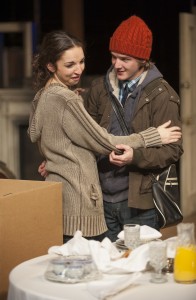 Later that same day, Edward’s dad, Tom Sergeant, a well-to-do London restaurateur with a personal driver and wallop of social conservatism, visits Kyra for the first time in three years. Well, he has actually never been inside this apartment before. Kyra recently moved to the East End of London—birthplace of the cockney dialect—to teach underprivileged students, and ended up in a shabby, unheated flat.

Todd Rosenthal’s appealing set, however, ain’t too shabby. Decked out with hardwood floors, crown molding plus a spacious kitchen and living area, I found myself quite envious of Kyra’s digs, despite the water damage on the ceiling.  Tom’s condescending criticisms of the ramshackle apartment, which raise many brows given the man’s own tramp-like appearance and mannerism, are among the first quibbles to snowball into full-blown political rhetoric. As aesthetically pleasing as Rosenthal’s set is, an area so immense has a way of devouring tension. And “Skylight” thrives on unbearable tension.

Through no fault of the actors, the most important piece of exposition—that they were in a six-year affair while Kyra was his employee—seems implausible. It is not because of the age difference—which is the meat of the play—but the chemistry. The two performers’ connection is so slight that all embraces, kisses and flirtations feel forced and unnatural. There is never a moment, as they stand on opposite sides of the massive apartment, where you fantasize that they might instantaneously lunge at each other, the pressures and desires too much to contain. So, when they do lunge, it is mostly just uncomfortable.

Johnson never indicates his character’s wealth, a perfectly fine choice for Tom, so confident in his worldly position. But, in an all-too-showy performance, he unwisely swings him in the opposite direction, concocting a high-society fellow fit for the corner bar at a bowling alley. For a character who vocally takes so much pride in his strata, the Joe Schmo posture and attitude are perplexing. The dialogue implies that Tom is often in control, but he’s no match for Rook’s stalwart Kyra. None of the charm is there that must have attracted her—his ideological South Pole—to him in the first place. And, competing with Rook’s likable turn, the audience resolutely sides with her on each and every divisive issue.

Regardless, Hare’s play poses many questions worth pondering. The selfishness of wealth versus the smugness of charity; Can intergenerational relationships work when there is a distinct ideological divide between generations?; Does an accumulation of years account for an accumulation of maturity? (In this critic’s opinion, the eighteen-year-old Edward is the most mature character onstage). If you’ve multiple age-groups in the car on the drive home, these question will probably come up, and each person will attach themselves to a different character. Post-show conversation is a fantastic occurrence, but this lecture-like production could provoke so much more. If only the pondering weren’t so ponderous. (Johnny Oleksinski)