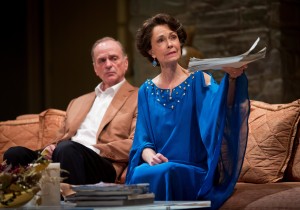 No one ever told Deanna Dunagan “those who live in glass houses shouldn’t throw stones.” Just examine some of the actress’ most recent characters. At the weakest junctures in their lives, they revel in the thrill of throwing some size stone, be they pebbles like Madame Armfeldt’s sage interjections in “A Little Night Music” or Violet Weston’s boulders of venomous insult hurled at her closest kin without remorse in “August: Osage County.” Of course, those characters spent their snarky days in sprawling country estates and boarded-up Oklahoman crypts.

Now residing in a contemporary Palm Springs home with walls made of mostly glass, maybe Dunagan has finally learned her lesson in “Other Desert Cities.” But in Jon Robin Baitz’s play, which opened on Tuesday night at the Goodman Theatre in an endlessly entertaining production directed by Henry Wishcamper, her character’s defenses are so ironclad that, despite her home’s literal fragility, Polly can launch verbal weapons of mass destruction at will without a smidgen of fear of retaliation. Dunagan’s brutal Polly is Nancy Reagan-cum-Mary Tyrone, as frightful a theatrical creature as ever there was.

Framed pictures of Nancy and Ronald are clumped into a corner of Polly and Lyman Wyeth’s (Chelcie Ross) home—recalling Californian wealth of yore or, perhaps, “Boogie Nights”—along with other photographic glimpses into the couple’s glamorous past. Lyman met Ronnie when the two men were both fresh-faced Hollywood stars, and later when Ronnie became president he made his buddy an ambassador. The politics of hypocrisy and the hypocrisy of politics make an early entrance in Baitz’s play.

Hidden away from the photos of movie stars and famous politicians, in a dimly lit hallway, is a single portrait of the couple’s dead son, Henry, who became associated with an extremist group in early adulthood and killed himself shortly thereafter. Decades later, his presence still hovers ominously over the home while his brother, Trip (John Hoogenakker, brilliantly releasing tension), a Berkeley grad-turned-reality TV producer, and New Yorker sister Brooke (Tracy Michelle Arnold) descend on the desert to celebrate Christmas with mom, dad and peppy Aunt Silda (Linda Kimbrough), recently out of rehab. 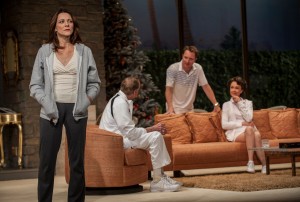 While the family history of Baitz’s play is undoubtedly macabre, “Other Desert Cities” itself lies somewhere between “Long Day’s Journey Into Night” and “The Importance of Being Earnest” in the canon of well-kept-secret stories. The playwright’s dialogue will be bristling along gleefully from quip to quip like the sharp witticisms of Wilde’s Lady Bracknell or Shaw’s Lady Britomart, when, all of a sudden, what you thought was a harmless joke bores into the recipient like a sledgehammer. After one of Dunagan’s particularly stinging zingers, a gentleman behind me quite loudly expelled a “woof.”

Most of the “woof”s are drawn out by Polly, a traditionalist who believes in the sacredness of behind-closed-doors activity. Although she begins as a domineering, judgmental über-conservative mother, she’s generally harmless enough. When it’s revealed that author Brooke’s new novel is, in fact, a memoir, detailing the events surrounding her late brother’s death and the role Polly and Lyman’s cruel parenting had in it, Dunagan really lets her claws come out. Chelcie Ross’ Lyman is a strict father, but he allows streaks of love and feeling to penetrate his otherwise stern mask. Polly is spiteful and vigilant.

Thomas Lynch’s sterile yet lived-in set—it elicited many an “Ooh” and an “Ahh” as the curtain went up—provides a compelling battleground for Dunagan. Adorned in Kaye Voyce’s brightly hued costumes in an environment predominantly covered in fabric, the visual impression is safety and calm. But, standing apart from the comforting fabric and pastel colors, there loom two stone-brick pillars in the room. One pillar holds up the ceiling while another houses a fireplace, the charred wood at a perpetual glow. With these sturdy, unhuggable pillars of tradition, Lynch has superimposed the parents onto the home—no divide between the dwelling and the dweller. The House of Wyeth.

Although the first two hours pack a punch with intoxicating back-and-forth, “Other Desert Cities”‘s culmination is a touch too anticipated for its force to be powerfully felt. Arnold—in a state of ongoing seasickness as though this family makes her nauseous—certainly takes the brunt of the impact and her tears do flow truthfully, but Ross and Dunagan endure an easier ride. It is rare to think Chicago actors should be any more guttural than they already are, but this scene must be in energetic contrast to the rest of the play in order to shock, as is intended, and be larger-than-life. It needs to be emotionally draining. Currently, the moment is restrained, but its aftereffects intelligently linger. What is remarkable about Baitz’s ending is that, in five minutes or so, the audience’s outlook on every character is majorly shifted. Everything you know is wrong. And, in a play as cold as this one, there is something so warmly cathartic about uncertainty as the curtain falls. (Johnny Oleksinski)