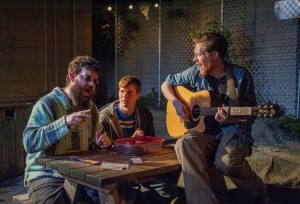 Right from the start, director Shade Murray lets the audience know that he isn’t afraid of the (often lengthy) silent patches between Annie Baker’s careful slice-of-life dialogue. And neither are his actors. When the lights come up on the backend of a coffee shop in Vermont (created here with just the right amount of loving grunge by scenic designer Dan Stratton), we behold two bearded slackers (impeccably clad in Joanna Melville’s subtly disheveled duds) sitting on a picnic table, staring in opposite directions. And that’s more or less all they do. For around two full minutes.

When one of them finally does open his mouth, it’s not to begin a conversation, but merely to mumble-sing a lyrically questionable song to himself. And then to slowly take a sip of his coffee while his pal puffs a cigarette. And though it may not sound like it, every moment is enthralling.

It’s quickly made clear that Jasper (played by Steve Haggard with a slight swagger and a chip on his shoulder) and K.J. (Brad Akin, spacy and childlike) are no strangers to this picnic table. When the backdoor of the coffee shop opens and young new employee Evan (endearingly portrayed by Michael Finley) haltingly asks if they wouldn’t mind moving along so that he won’t get in trouble with his manager, they gape blankly back at him, inform him that they have permission to be there and then simply wait for him to go back inside.

A few encounters later and the self-conscious Evan, watching these two misfits discuss writing, poetry and the many names of their so-short-lived-it-may-not-have-existed band, finds himself drawn into some semblance of friendship with them. This is where Baker’s script asks us to take a leap of faith and just accept that this naive high-school junior who spends a week in the summer as a counselor at a music camp and nearly hyperventilates at the idea that he may have consumed “a whole sip” of psilocybin mushroom tea looks forward to spending time behind his workplace with two bearded thirty-year-old slackers. Ultimately, it’s not that big of a leap. 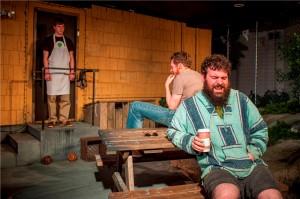 There’s a hero-worship that quickly develops between the buttoned-down Evan and the more erratic Jasper, who strengthens this relationship through off-handed, though mostly friendly, condescension and readings from his unfinished novel. At one point, after asking “You ever read Bukowski?” and receiving a negative response, Haggard delivers a silent, piercing glare constructed of the exact mix of disappointment, shock and scorn that I have seen Bukowski fans deliver to many an unwitting compatriot, whose only crime was to be unfamiliar with the caustic poet/author’s work. There is nary a high-school student in small-town Vermont that could overcome that gaze.

Intensely familiar and blatantly unhurried exchanges like this, all of which play well in A Red Orchid Theatre’s intimate (read: tight) space, are sprinkled throughout this show’s two-hour (with a ten-minute intermission) running time and imbue the relationships with a deep honesty. At one point Akin’s K.J. explains propositional calculus and truth tables to an understandably confused Evan in an excited, if pedagogically stilted, tone: “If p then q… then… you know… truth.” As someone who struggled through Discrete Mathematics, I couldn’t have said it better myself.

Though nothing ever feels rushed or dishonest, there are some sections here that feel intentionally slowed. When the cars casually cruising by in Brando Triantafillou’s quiet sound design offer the most action, it’s as if Murray and his actors are taking Baker’s script right up to the edge of audience antagonism before walking it back to reveal a surprising emotional richness. Though ostensibly nothing much happens, there’s hidden depth in this subdued script.

It’s fairly safe to say that the show’s conclusion isn’t likely to leave anyone with an earth-shattering feeling of new discovery, but it does provide the same warm, vaguely uplifting sense of well-earned rightness that the finale of “Little Miss Sunshine” managed to inspire. “The Aliens,” a title taken from a Bukowski poem, premiered almost two years ago Off-Broadway, earning Baker the Obie for Best New American Play. This Chicago premiere clearly shows why this script deserves recognition, touching on the themes of alienation, uncertainty, connection and even death without once striking a false note. (Zach Freeman)