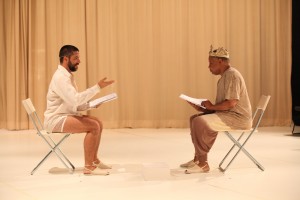 Miguel Gutierrez is a Brooklyn-based dance theater artist whose new work, “And lose the name of action, ” comes to the MCA next weekend. Gutierrez spoke with me about the creation of the piece, the unreliability of perception and working with his changing group of collaborators, the Powerful People.

You’re working with some very big subjects—life, death, families, doubt. How did this piece come about?

It grew out of my previous piece, “Last Meadow.” Toward the beginning of making “Last Meadow” my father started having neurological problems. Around that time I was introduced to a book by Mark Johnson called “The Meaning of the Body.” In it, he’s attempting to eradicate once and for all mind-body dualism by arguing that perception is an embodied process; that we’re contextualized in the world through our bodies. When I read this I thought this makes a lot of sense and secondly, this is pretty obvious. It’s beautifully written, but I didn’t understand how it’s a big surprise. Those two events got this piece rolling, as opposed to what usually happens, when I finish a piece and say, “okay, next idea.” By the time I finished “Last Meadow” my father’s problems weren’t over and I felt I was addressing something that merited further investigation.

How did the Jorgen Leth film “The Perfect Human” influence the piece?

I think that was more a visual inspiration for Boru, the video artist. His presence through the process was really intriguing to me because he doesn’t come from dance or theater at all. I felt his presence for me represented, in some way, doubt. Not doubt in me, but doubt around all these ideas. There’s something about the antiseptic nature of that movie—the cleanness of it—that feeds into his process. For me it was a foil for my way of working and being—I’m not methodical or clean in my work.

These aren’t subjects that can really be approached in a clean way.

The last few years my work has become really associative in nature; these ideas flow into and through each other. Their interrelationship intrigues me, and their interrelationship within time-based art. What’s cool about working through a longer duration is how you can bring together things that seem disparate and, through the course of the evening, find their relationship.

Why do you choose to work with a changing group of artists instead of a consistent company?

I did work with the same group for a while when I started the Powerful People. Then I realized when I imagined pieces, the configuration changed each time and I had no investment in maintaining a group of people around for no reason. It’s been Woody Allenesque in that I’ve worked with people several times, but I’m as interested in what they bring to my work as artists. I’m more focused on the content than the show. And it keeps me in an interesting place in my mind where, when I’m conceiving a piece, I’m not tied to getting a certain number of people in there.

How has “And lose the name of action” been received?

There’s so much language around it, as a function of fundraising, that my concern is there being a lot of expectation around the description of it. That people will be looking for something. If we lived in a world where I could just tell people “it’s about ghosts” that would be great. When I sent out emails announcing the show I said it was about ghosts and my family and the fucked-upness and fragility and glory of being alive. Because that’s all that it is in a way. I think it’s moved some people…but I don’t know. We’ll get a crack review in the Times then get one gory review in The New Yorker and you never know who to fucking believe. And to me that’s a great testament to a central tenet of the piece. This thing about perception being potentially unreliable and the way knowledge is prioritized through the body, you’re left with an awareness that you have no idea what people will think one minute to the next.