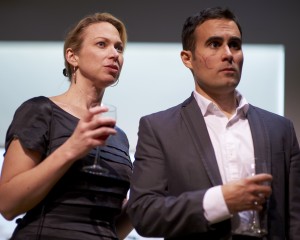 As the wars wind down, American servicemen and women will return and assimilate into a peacetime society. Ethan Lipton’s script attempts to examine whether we’re ready for that eventuality, with mixed results.

Do-gooders Walter (Peter Moore) and Marjorie (Kendra Thulin) adopt vet Luther (Michael Salinas) and take him into their lives. To enhance his integration, they bring Luther to Walter’s company with disastrous consequences.


Moore and Thulin are deliciously vanilla; their parody of the socially progressive stings. Salinas’ ability to switch from vulnerable, broken soldier to remorseless killer is frightening. Joanie Schultz’s staging combined with Chelsea Warren’s set and puppet design make for some interesting visuals. But Lipton’s script is uneven; monologues about lifestyle go nowhere. His absurdist touches seem out of sync with the subject matter; his comparison of vets to stray animals feels condescending. For many vets, the saying is true: whatever doesn’t kill you makes you stronger. (Lisa Buscani)