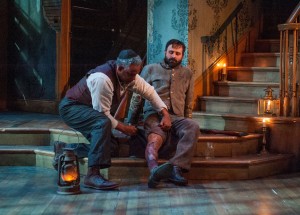 An onstage door left ajar has an unusual way of commanding an audience’s attention. Unspoken judgment accompanies gawking at the unattended entranceway as though a character from a different play might suddenly wander in and rudely unwrap a Jolly Rancher. The powerful wooden doors were left open a crack on Friday night at Northlight Theatre, while a realistic background rain poured. But in Matthew Lopez’s popular play, “The Whipping Man,” this is no mistake. The door is open for the Prophet Elijah.

Per the Passover tradition, a seat at the “table” is kept empty as well. Caleb (Derek Gaspar), Simon (Tim Edward Rhoze) and John (Sean Parris) sit around a repurposed crate, improvising a Seder in the immediate aftermath of the Civil War. What could be more unexpected than a Civil War Seder? Even more shocking are the location and the participants. In the conflict-ravaged southern city of Richmond, Virginia, in a once opulent house pummeled by violence and looting (set by Jack Magaw), Caleb is a Confederate soldier, back at his all-but-empty home with a debilitating injury; John and Simon are his slaves, now free men, both of whom devoutly practice Judaism. It sounds like the setup to a historian’s “man walks into a bar” joke, but Lopez has written a visceral play of hardship, deep-rooted prejudice and prevailing strength of character.

Simon, an older gentleman with an absent wife and daughter, is the pillar of old-world tradition and respect. He proudly and maturely adorns his newfound freedom, but he does not openly resent the slaveowners—Caleb and his parents—who enabled the grotesque system. In the role, Rhoze emanates reliability and steadfastness as he guides the close-in-age Caleb and John over emotion-heavy hurdles.

The spry and sly young John makes his entrance wearing a burlap sack around his head, framed by the doorway, with the lurking horror of a faceless ghoul. In the final minutes, he is adorned in stolen man-about-town coattails and a top hat, staring off into the ominous wilderness. What unifies these contrasting visions is uncertainty. Whose face is sheepishly grinning behind that burlap sack? What dangers and wonders of lawful freedom lie beyond the doors? Lopez’s play presents freedom’s burdensome present realities, while knowing that there are better days to come. That strong juxtaposition does, however, introduce a weakness. 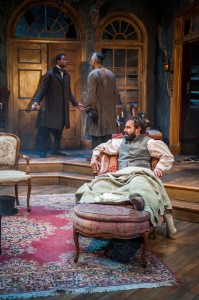 “The Whipping Man” and its characters—Simon, in particular—are already very aware of the Civil War’s modern legacy, only days after it comes to a close. Events like President Lincoln’s assassination, the Battle of Appomattox Courthouse and the Battle of Gettysburg are alluded to with the bullet-point conciseness of a textbook sidebar. In those few sections, the play feels jarringly self-aware. But director Kimberly Senior lends her light and honest touch to the more history-laden sections, allowing the vividly rendered relationships to bear the blinding pain of the war at hand.

The untethered pain is as physical as it is profoundly emotional. Caleb (Gaspar portrays a man in perpetual pain with little opportunity for blessed amelioration) returns home with a wounded leg, infected by gangrene, and Simon, experienced in these matters, knows the leg must be amputated. In the moments leading up to the amputation there is such impressive urgency and grave intensity from all, that as the fearsome and jagged saw makes contact with the leg, the audience wholeheartedly believes they are about to witness a wriggling limb be hacked away before their very eyes—a testament to committed, focused acting and supremely realized danger by Senior and violence designer Chris Rickett.

While the events leading up to the amputation are remarkably photorealistic, the story of Lopez’s play is, at times, difficult to fully believe. But this is the theater, and it matters little. The unlikely situation these personable, struggling characters are thrust into enables bold, poetic, moving parallels drawn between the chosen people of Israel and the unjustly enslaved Africans of America—two divergent groups forged into one by their heroic and most unfortunate trials and tribulations. As Simon emphatically shouts “Brother Abraham! Brother Abraham!” in celebration of President Lincoln’s fallen life and in gratitude of his titanic resolve, it is never clearer that only the outlying idealism of such brave men and women can part the rain clouds. (Johnny Oleksinski)