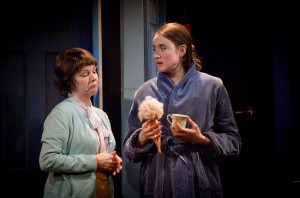 “Why don’t men kiss their wives?” asks a playful stranger in British playwright Lucinda Coxon’s “Happy Now?” This complicated play aims to answer that very question through reflective storylines and crackling dialogue. In two brisk hours, poignant and uncomfortable themes are immediately alluring in a way that brings to mind Albee’s “Who’s Afraid of Virginia Woolf?” Several spellbinding scenes, in which two married couples spar, examine the complexities of long-term love in a busy world. The lines slice and dice so quickly that even as an audience member you find yourself waiting for the pauses to take a breath.

Composed Kitty seems like every bit of the contented modern family woman until a chance meeting with a stranger in a bar makes her question everything in her life. In several well-structured and highly perceptive scenes, we watch as Kitty’s life falls apart in moments of family tragedy and spousal neglect. As her happy life with husband Johnny unravels, their friends Bea and Miles also question whether or not the rigors of married life are worth the struggle. Coxon’s script points out the value in directness, the pain of saying what you probably shouldn’t and the consequences of when you don’t. Perhaps the most heartbreaking moment in the play is when Kitty eventually confronts her husband and the imminence of old age in a touching monologue that asks, “Is this my life? My one and only life?”

At times darkly hilarious and at others viscerally raw, the competent cast of Shattered Globe Theatre’s production of “Happy Now?” keeps up with the challenging material, even if their accents go by the wayside. Christina Gorman bears all, and by the end has the appearance of a woman simply run-over, a performance that will undoubtedly stick with audiences if only for its sheer emotional range and vulnerability. A sharp and stern Linda Reiter plays Kitty’s hyper-negative mother-from-hell. When given her proper airtime, Cortney McKenna plays the part of the supposedly empty yuppie, Bea, who’s just boiling under the skin. When she eventually tells Kitty, “You’re a time bomb,” her mousey delivery alone makes one question whether or not Kitty is as strong as the men in her life give her credit for, alluding to the bleakness of the conclusion.

“Happy Now?” is exactly the emotional catharsis one should always be seeking when shelling out money at the theater. It’s a memorable play that reaches in and grabs the delusional and co-dependent parts in all of us and shakes them up. Though staged in a black box, there’s nothing small-scale about this powerhouse drama. Amanda Rozmiarek’s unique set, a flurry of papers and hanging telephone wires that visually display the inner workings of the busy adult brain, suggests that no matter what calming colors and decorations we choose, our lives are never truly free of chaos. (John J. Accrocco)