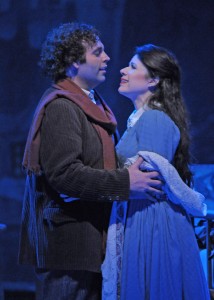 Given that it was 1972 when Pier Luigi Pizzi’s sumptuous production of Puccini’s “La bohème” was first presented at Lyric Opera, few would argue that, after countless regular revivals across four decades and scenery that was literally falling apart, it was time for a new production to be seen here. What was surprising was new general director Anthony Freud opting to bring in another traditional and less elegant production from the San Francisco Opera that is itself already almost twenty years old.

The garret of the starving artists of the current production is claustrophobically cramped as it might be in real life, although ironically, the libretto specifies how spacious the attic is. But hey, people don’t sing their way through life, either.

Director Louisa Muller, making her Lyric debut, often has the four artists moving around like the Marx Brothers, almost tripping over one another within a small set letterboxed in all directions while much of what we are looking at in Michael Yeargan’s serviceable design is a painted backdrop of the outer edge of the building and its surroundings. Even that gives way in a rather cinematic if predictable manner that is nonetheless effective as Mimi and Rodolfo sing their Act I love duet under a moonlit open sky.

The most refreshing and redeeming aspect of this production from a dramaturgical perspective is that these folks do actually look and act as if they could really be young artists. In fact, one of them, Korean baritone Joseph Lim as Schaunard, is a Ryan Opera Center member in real life. Rather than the static, haggard and expansive figures of so many classic bohèmes, these are all young and energetic folks and that is wonderfully telegraphed throughout the evening.

New York tenor Dimitri Pittas is making his Lyric Opera debut as Rodolfo and on opening night, at least, was straining to be heard early on and was having trouble gracefully scaling his high notes. He did improve as the evening went on, but this is a big house for a voice his size.

Puerto Rican soprano Ana María Martínez has enough heft to her voice, but not the lyricism needed for this role. Her sound was often tight, shrill and unfocused, especially early on.

The best you can say about the Pittas-Martínez duets is that they were respectful of each other and sought not to overpower one another in terms of balance and that their youth and acting ability were a compensation for singing that never managed to soar. Most importantly, they have chemistry together and you do buy that they are actually in love, a true rarity in past productions.

Elizabeth Futral’s Musetta is a real bright spot. Aside from singing confidently, she is playfully flirtatious but there is also a needed poignancy that is often missing, especially in Act IV.

Still, you know something is awry when the most moving singing of the evening is Colline’s Act IV tender farewell to his overcoat luxuriously sung by Italian bass Andrea Silvestrelli.

For those not locked in to seeing this cast as part of a subscription package, it may be wise to wait for the potentially more promising March cast of Maltese tenor Joseph Calleja and the much-anticipated debut of Russian soprano Anna Netrebko. Or better yet, for those myriads of fans of this mega-popular opera, catch and compare both casts. (Dennis Polkow)