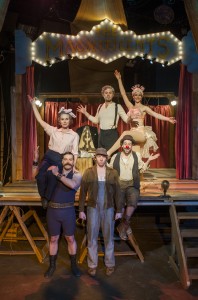 Actor/magician Dennis Watkins, hot off of last year’s widely praised extended run of “Death and Harry Houdini, ” is currently enjoying an open run of his one-man magic show, “The Magic Parlour,” at Chicago’s Palmer House. So it’s a good time for an updated remount of The House Theatre’s 2007 Watkins-penned, magic-centric show “The Magnificents,” where Watkins stars as an aging, ailing magician known as Magnificent who serves as head and father figure of the titular not-quite-ragtag group of traveling performers.

Here Watkins plays a slightly gruffer version of himself, with a dash of white in his hair, a slight stoop in his posture and a nagging cough. But for those who have seen “The Magic Parlour,” his witty stage banter is familiar and engaging, as are several of the tricks performed during the course of this two-hour-and-fifteen-minute (including intermission) show.

Lee Keenan’s multifaceted set, mostly consisting of a fold-out stage on the back of an old truck bed, is a bit of a magic trick in itself, opening and closing in various ways to reveal different scenes and even providing the movie screen backdrop for three well-made, though ultimately unnecessary video dream sequences created by Jack Lawrence Mayer.

When a nameless/speechless boy (Tommy Rapley) other characters simply refer to as “the kid” is caught stealing an audience member’s wedding ring during a trick, Magnificent’s kind-hearted wife Rosie (Tien Doman) begs the group to give the boy a place to stay and a chance to prove himself. Thus, through a series of trial and error “auditions,” do we find out that the boy’s true natural skill lies in the art of legerdemain. And here we get to the point: Magnificent needs a pupil he can pass on his art to before it’s too late. 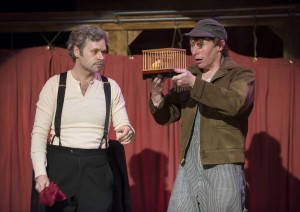 In service of this, we get several charming sequences of mentor/mentee magic lessons. But the way Watkins’ script weaves in and out of performance and backstage interactions begins to present us with a slight problem, as we’re left wondering when we’re “the audience” (from which volunteers can be plucked up on stage in service of a trick) and when we’re just the audience (witnessing the performer’s private lives while securely hidden behind the fourth wall). It’s a question Magnificent would no doubt wave away as trivial, but it’s distracting all the same.

Watkins’ magic is as remarkable as ever and the rest of the cast makes the audience-pleasing, mostly whimsical and deceptively complicated choreography (Rapley) look second nature, but there’s only so much that these visuals can give us. Beneath the shiny exterior, “The Magnificents” is ultimately a story of family and connection, love and loss, but aside from one heartbreaking moment when Smith’s Chase, playing doctor to Magnificent’s weakening condition, demands that everyone else put on their clown noses, there’s a dramatic core that just isn’t quite there. For a brief second Smith captures the intensity of the love and fear that can grip us all in trying times. Along with the tricks and sight gags, which are undeniably striking, this show could use a few more moments like that. (Zach Freeman)