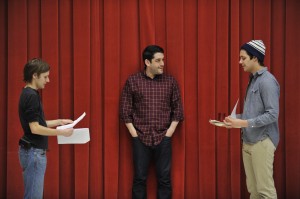 “It’s both sides of the spectrum: drunk college kids and very serious politicians, all mixing together on the streets,” says Paloma Nozicka, a recent graduate of the University of Wisconsin-Madison and a cast member of The Goodman Theatre’s upcoming “Teddy Ferrara” by Christopher Shinn. “I went to school there,” she tells me, eyes bright with nostalgic pride and a certain kind of ferocity reserved only for one’s alma mater.

She, myself and six other understatedly charming members of the “Teddy” cast—Josh Salt, Adam Poss, Ryan Heindl, Chris Imbrosciano, Jax Jackson and Rashaad Hall—are all situated in a circle, rather reminiscent of an acting class, in the upstairs lobby at the Goodman, discussing the weirdnesses of college and reliving the group’s Monday afternoon adventure to UW-Madison.

What were they doing there? After all, isn’t the Goodman that theater where Brian Dennehy brassily condemns Pablo Schreiber atop a mountain of boulders? Or where Catalan director Calixto Bieito has André De Shields sing an upbeat ditty about seasonal change as he’s sodomized? In a word, yes. So, why was this scrappy band of twentysomethings road-tripping to a Big Ten college town best known for partying and The Onion?

Nozicka explains, “On the first day when we had our presentations from designers, they talked about how ‘Teddy’ was set in a large state school. And one of the schools that they were looking to for inspiration was UW-Madison, which I was really excited about.” She continued, “especially for people who have never seen a big state-school campus like that, I thought it would be a nice day trip.” And, so it was. But despite the play’s humor and youthful freneticism, there is a lurking darkness in the work that this journey had to also acknowledge.

“Teddy Ferrara” loosely resembles the events surrounding the 2010 suicide of Tyler Clementi at Rutgers University. Teddy (Heindl), a young gay student whose dorm roommate secretly films his sexual encounter, jumps off of the school’s library, killing himself in seeming response to the privacy invasion. But there is much more to Teddy than what meets the eye. Shinn shines a light on a political system and culture that seeks immediate answers and simple fixes for intricate situations without the benefit of an actual, receptive conversation. 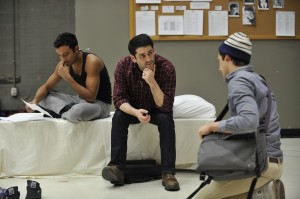 “These big state schools are, in a lot of ways, microcosms of our larger culture,” said the play’s director Evan Cabnet, a New Yorker more adorably thrilled to be here in mid-January than any bundled-up Windy City dweller I know.

“There is a hierarchal structure, there is a patriarchy, there is a government, there are the ‘it kids,’ the marginalized groups. Chris felt like that is a really ripe environment for some of the issues he’s wrestling with in the play.” Cabnet also told me that, while the creative team is using Madison as their base of inspiration, the actual location is open-ended. “Chris has written the play deliberately vague in terms of where it’s set. We know it’s a very large state college. He wanted it to be really anywhere.”

But for the cast members who’d never even seen a campus town, the trip was incredibly informative. Poss, who plays the manipulative newspaper editor Drew, and Rashaad were fortunate enough to meet with the student editor of the UW-Madison Badger Herald, and sit in on a pitch meeting with the determined editorial staff.

The group inadvertently arrived in town while the rest of the school was still on break, which, for such a usually big community, proved an intriguing metaphor for the isolation their characters feel. Poss ruminates on the stunning vastness. “We could see some dorms and a couple of lights would be on. There is just something so lonely about being in a place that’s normally surrounded by 40,000 students.”

As we discuss college memories, Jackson observes that uncomfortable dorm rooms seem to be the lingua franca of campuses. “Dorms don’t change from college to college, for the most part,” he concludes. “Everybody thinks ‘DORM’ and it’s mostly the same image of the cinderblock walls, and the crappy extra-long twin mattress, possibly bunk bed, particle-board desk.” Imbrosciano chimes in to say other typical features are “the common areas like the food court or the student union. What my school referred to as ‘The Pit.’ They all have a very similar feel.” Establishing visual references is important for “Teddy Ferrara” because the play, performed in the malleable Owen Theatre, has barely any physical set.

As a result, Salt says that they were drawn to the architecture in Madison. “The buildings were all beautiful, but at the same time there was this shadow to them.” The cast ventured inside the library, often a forgettable building. But libraries and their dreary nooks and crannies are an important part of this play, and the group was alarmed by the UW library’s creepiness.

Now living in Chicago, Nozicka remembers the school’s defining attribute as its security. “Madison is very insular. It’s very safe, everywhere you go feels very safe. There’s not a lot of homelessness. You don’t feel like you’re in a cosmopolitan city.” Her tone gaining some darkness, she continues “when bad things would happen, it would shock the whole community because you don’t think things like that would actually happen in Madison.” The circle nods in knowing agreement.