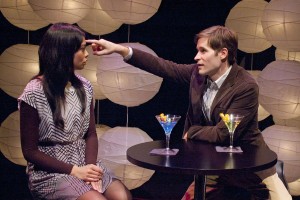 How we relay history has been forever changed by photography and video. Walk into any American classroom today, collegiate or otherwise, and you’ll doubtless find projected YouTube clips and imagery-laden PowerPoint presentations as essential to the syllabus as the course’s textbook.

Why not? The educational opportunities photography affords are bountiful and, given the rapid expansion of the internet, easy to access. Yes, there is a great deal of knowledge to be reaped from pictures and video, while keeping in mind that, like written-down investigative journalism or an essay, the camera has a bias all its own.

There exists a hidden story of each subject beyond the captured pose, the edited interview or the thirty-second clip, not to mention those nosy bystanders on the periphery that the cameraman opted to exclude from his shot. And, for the most part, these biases are apparent to the observer. But what about when they depict a culture foreign and otherwise inaccessible to a plurality? Might the mystique and exoticism of the unfamiliar make you turn the other cheek? Playwright Naomi Iizuka explores past and present East-West relations through the camera lens in her uneven “Concerning Strange Devices of The Distant West,” receiving a Midwest premiere at TimeLine Theatre Company.

The most appealing portions of Iizuka’s Japan-set play address the camera’s allure using colloquial poetry and intellect, navigating between Victorian-era Yokohama and modern-day Tokyo with a Stoppardian temporal attachment. The years are coupled thematically by shared lines of dialogue, and, more literally, by an ancestor revealed late in the play. The playwright defines these separate eras simply: the 1880s are burdened by rigid formalities and sexual shame while the present resides on the opposite end of the spectrum, finding private shame in public shamelessness. 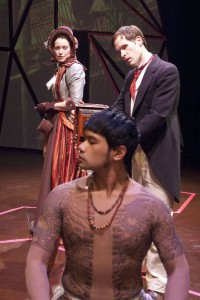 In the Victorian era, when the camera was a brand new invention, Rebecca Spence and Michael McKeogh respectively play Isabel Hewlett, a demure housewife traveling to Japan with her husband (a splendidly restrained Craig Spidle), and Adolfo Farsari, a sham photographer who pads his wallet with staged shots of fake swordsmen and prostitutes gussied up as Geisha girls to appease the tastes of Westerners, salivating at the enigma of the Orient. Isabel is taken, not only by the culture of Japan, but by the camera-toting expat in her midst. Intriguing enough, there is a falseness to these portions that suggests Iizuka herself is seeking to satisfy the audience’s appetite for a particular perception of Victorian-era citizenry.

Once we are whisked away to a posh Tokyo bar—director Lisa Portes fashions the alley stage into a surreal fashion runway of a pulsating nightclub for her transitions—the contemporary scenes improve, beginning with a charming, sensual communication between a photo enthusiast (McKeogh) and his translator (Tiffany Villarin). However, that pleasantly acted, flirtatious conversation soon unravels into a rushed trade paperback mystery of disguised identity and blackmail that tramples over Iizuka’s subtler, more nuanced themes.

There are images that chill: a stoic Japanese man (Kroydell Galima) almost wholly covered in tattoos, fanciful hanging lanterns, and gaseous projections inside of a large origami-looking set piece that seem tactile and real. And the design (projections by Mike Tutaj; set and lighting by Brian Sidney Bembridge; sound design by Mikhail Fiksel) collaborates tightly into a sleek East-meets-West amoeba. But the story itself plays out like a television procedural drama; the acting often has a presentational largeness unfit for primetime TV or the stage. Some of the performance’s immensity is likely born from the psychology of leading a double life—lending too much energy to a false identity. Like the deceptive 1880s photographs, few characters in contemporary Tokyo are who they initially claim to be. And, while there is a wisdom to that parallel, there is a great deal more obviousness. (Johnny Oleksinski)