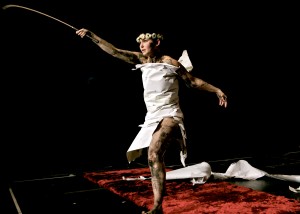 “You can’t put your hands together in Minsk. You can’t drum.” How can that be true? The element that most bores into the audience at Chicago Shakespeare Theater is a cacophony of percussion: clinking glasses, popping seafoam-green bubble wrap, the crack of a whip, paper tearing, the powerful thud of eighteen feet, plastic sticks rhythmically thwacking. It’s a soundscape that suggests a thriving metropolis of hustle-bustle social lives and vibrant, wide-open artistry. But the reality for Minsk-dwellers is quite the opposite.

The crueler side to the chorus of noise is the brutality and abuse that plagues these artists and the broader citizenry of Minsk day in and day out. While the city itself may frown on self-expression, there is no shortage of pounding in “Minsk, 2011: A Reply To Kathy Acker,” Belarus Free Theatre’s cataclysmic protest and impassioned love song to the city that birthed them, raised them and quite unforgivingly taught them hardship.

“Minsk, 2011” is a rebellious play of uncompromising individual and collective voice. The masterfully stylized work opens with a series of men, all clad in gray polos and dark khaki pants, approaching a microphone, one at a time, trying to summon up a few words. When speech fails, he pulls out a pride flag, begins to blow into a flute or endeavors to clap immediately before a brutal patrol force assaults and rips the performer from the stage. Oddly enough, there is actually some humor in these attacks.

The audience is unsure of whether they should laugh, though, being in attendance at something of a cultural event. The company onstage, after all, is Belarus Free Theatre, a boundary-pushing collective that has become internationally renowned in recent years for brilliant, acclaimed creations like “Being Harold Pinter,” which played Chicago Shakespeare, the Goodman and Northwestern University in 2011. This latest devised work that comes direct from the Public Theater’s Under The Radar Festival is an emotional, sensory feast of heart-stopping imagery and horrific, gloriously truthful stories that will undoubtedly remain with you for many years to come. 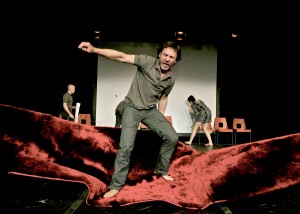 Who are they? Nine ruthlessly expressive actors—Pavel Radak-Haradnitski, Yana Rusakevich, Aleh Sidorchyk, Dzianis Tarasenka, Maryna Yurevich, Yuliya Shauchuk, Siarhei Kvachonak, Viktoryia Biran and Kiryl Kanstantsinau—who bravely expose the demons of their hometown in a valiant and necessary attempt to better the situation. However, their art, so popular and acclaimed around the world, has not made fans out of the government of Belarus, among the last totalitarian regimes in Europe. Many of the collaborators have been arrested, exiled, fined and otherwise reprimanded for performing.

It’s no wonder. In addition to the work’s straightforward political criticism and unashamed vulgarity, “Minsk, 2011” confronts sexuality as its major theme—the titular Kathy Acker being an American writer who tackled sexuality and violence with a directness at times abrasive. In what amounts to a dictatorship, flagrant displays of nudity all the way down to innocuous pecks on the cheek are vilified and can be punishable offenses. As in Shakespeare’s “Measure for Measure,” there is a hypocrisy to this false governmentally imposed virtuousness, denying an essential facet of humanity. As “I Love Rock ‘n’ Roll” plays, three women perform a striptease for a hunched-over, sneering government inspector who, after a pause, deems their erotic dance of artistic merit.

In manners as light and sensual as that striptease or visceral and challenging like an unforeseen terrorist attack, unison movement is frequently used by BFT to suggest larger-than-life occurrences—a packed, underground gay bar masquerading as a Canteen 32 by day and a forbidden 6A Art Club by night, or a dispersed, peaceful Chernobyl Remembrance Rally.

The actors contort their bodies into strenuous positions that echo the anguish of the words they expatiate. Imagine, if you will, a howling woman clawing through a restrictive paper shell, and, when she triumphantly escapes, the remnants of the shell gracefully drape atop her body like a Grecian gown. The devised work, enlivened by these actual political activists, prisoners and refugees’ own experiences, is a compelling work of playwriting (conceptualized, directed and adapted by Vladimir Shcherban; adapted into English by Chris Thorpe). Their quiet, magically personable monologues, which connect so truthfully with the audience despite the language barrier, set the pulse racing as rapidly as do the visual marvels.

The scenery is simple. There are eight timid chairs, a background screen for photos and English supertitles (the piece is performed in Russian and Belarusian) and a long, lush blood-red carpet with the unmistakable luster of velvet. That and other rosy objects complete the former Belarusian flag—white, red and white—which has since become a symbol of opposition to the government. The most paralyzing depiction is that of a woman’s three bags of sugar, spilt on the October Station subway platform after a terrorist attack, starkly standing out against a pool of blood.

In a final act of gobsmacking patriotism and solidarity, the actors hold up that carpet in front of their faces while they bellow out a folk song affront a dense field of calm white snow. The usual narcissism of performance eradicated, the story, the issues and the message take urgent precedence. A bolded line of spilt blood, but the puerile promise of a brighter tomorrow. (Johnny Oleksinski)