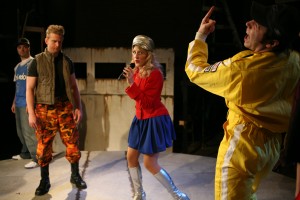 Playwright Ruth Margraff’s “Stadium Devildare” is a caffeinated dystopian fiction wherein politics, sport and theater have become indistinguishable from one another. Corporate sponsorship and war are intrinsically bound, and a widespread desensitization to tragedy has enabled a societal blood-thirst. The play belongs to a critical, pessimistic genre recalling the gladiator battles of the Roman Coliseum right on through to last year’s Republican Party primary cockfight with a strong dose of “American Idol” thrown in to encapsulate a national obsession with triumph through romanticized narrative. Catnip for the instant-gratification generation.

Failing to rise to the ample opportunities provided by its script, “Stadium Devildare” at Red Tape Theatre is a rare and persistently frustrating kind of production—Sam Shepard’s “Tooth of Crime” bears an unmistakable resemblance to this play in its mangled sing-song English and warped contortion of humanity’s bleak horizon—least of all because its violence has been rendered wimpy and restrained. World Wrestling Entertainment skirmishes may very well be staged and populated with impossibly broad wrestler caricatures, but the combat at least appears legitimate. Those beat-down folding chairs make bodily contact and hulking creatures are body-slammed to the floor. But there is no danger here; only playfulness or drab discoloration. “Stadium Devildare” endeavors to harness the electric energy of a wrestling match, anime, Fukasaku’s “Battle Royale” and video games like Super Smash Brothers without approaching any of those entities’ corrupt imagination or sheer entertainment value. 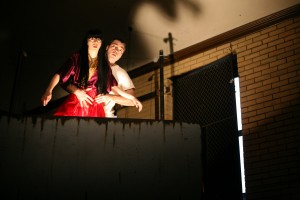 The action takes place in a war-zone stadium—likely a stadium more immense than modern-day Americans are accustomed to—flanked by rundown wooden scaffolding and an oversized three-tier cat jungle (set by Mike Mroch). Inside of a circular  platform, fighters duke it out to win the prize. Absent is the primal aggression of many thousands of people packed into bleachers, all of whom have separate allegiances to the fighters. In attempting to translate the competitiveness and buzz of a roaring crowd, an annoying, klutzy narrator (Lyndsay Kane, pushing beyond the limits of tolerability) repeatedly and tiresomely encourages the audience to clap for the fighters. Well, theater audiences have long been conditioned to clap at proper intervals—curtain up, curtain down, song’s end—and the relentless commands to cheer are painfully awkward.

Much of director Karen Yates’ haphazard production cultivates a similar discomfort. The performances are appropriately mammoth, but lack the sharpened precision of the pop-cultural material they so effortfully emulate. Anime has a robo-slickness that leaves little time for self-indulgent meandering, and the punches and kicks of video games are direct, powerful and economic. Whereas “Stadium Devildare” is messy and noticeably uncertain in its overabundance of motion.

The only developed plot-line outside of the tepid thrills of the competition is a forbidden, angsty love between the basement-bound Game Boy (Nicholas Combs) and Sailor Mars lookalike Lone Wolf Reiko (Carrie Drapac). Their relationship, carried on mostly in secret while the other fighters like Speed Racer Lamar (Matt Gellin) and Dazzler Expo Crenshaw (Andy Lutz) are off hobnobbing somewhere outside the ring unseen, acquires an abusive tone unearned by so silly a production. Of course, not all storytelling requires linear dramatic coherency in order to affect, but it does need some sort of anchor: visual splendor, humor, music, dance, something to take the audience by the hand. Yates’ staging—black-and-white anime videos accompany exploding homes, peripheral Americana, Godzilla projections, aerobic-though-hesitant fight choreography and an attic’s worth of other extraneous knickknacks—befuddles before it finally exhausts. (Johnny Oleksinski)