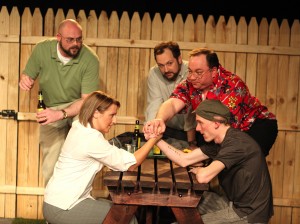 Even the best political satire has its limits. A constantly shifting Second City revue or a four-minute cold open on “Saturday Night Live” hits the spot like little else. But brilliant, biting satire should also have an honest, emotional center. Tina Fey’s Sarah Palin wasn’t a social-climbing moron, but a well-intended mother and politician with a surefire penchant for disastrous flubs and narcissism. Beneath the jokey facade was a real person.

“Successors,” playwright Jon Steinhagen’s lampooning of Mayor Daley and his politically entrenched family receiving a world premiere by Signal Ensemble Theatre, begins quite promisingly with small-talk and awkward family pleasantries in the backyard, but too soon unravels into a repetitive shouting match where it plateaus for over two hours.


The play, directed by Ronan Marra and titled with a Roman clenched fist, opens on the abdication of Mayor Kenton DeKoven (Vincent Lonergan), the family’s third in a line of mayors and the first one to step down from office. Of course, Daley was only a second-generation mayor, but here’s hoping for another! The Mayor, unlike his father and grandfather, quits because he doesn’t wish to die on the job, introducing a new complication: an endorsement for one of his kids. The following day, gathered at a summer barbeque celebrating the eighteenth birthday of college-bound grandson Tyler (Danny Mulae), DeKoven’s three antsy children (Anne Sheridan Smith, Colby Sellers and Bries Vannon), politicians themselves, are all atwitter at the possibility of pop’s public blessing.

“Who will it be?” becomes the parlor-room question of the play, and a question that takes too long to finally answer. These are not the sort of people you want to spend any substantial amount of time with—at least with the cruel Wyeth’s onstage at the Goodman, you might milk out some fascinating conversation. In fact, the three outsiders—Tyler’s girlfriend (Ariel Begley), son Scott’s ladyfriend (Simone Roos), and Hillary Clinton-esque daughter Patricia’s husband (Joseph Stearns)—continuously criticize the family for this very reason. They are mean, self-involved, insular people. 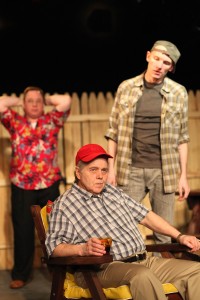 And, to be sure, there is much humor in that situation. Plus, Steinhagen is a meticulous wordsmith if ever there was one. But there is no person to root for, and the drama never becomes real enough for the audience to sympathize with Tyler, whose birthday is being ruined by his work-obsessed family’s usual shenanigans. Given a tender performance by Mulae, Tyler is the closest character in “Successors” to a victim.

The first act hoards many of the chuckles. Steinhagen has also written a role for himself and, knowing his style better than anyone else, runs away the most laughs. He plays Uncle Lou, the mayor’s sneaky, conniving spokesperson. His feisty, mean quips are exceptionally hilarious when he rambles them off, but that same telling-a-joke cadence washes over every character. There’s a big difference between a funny line and a deliberate joke. Two hours of the latter makes you feel like you’re at a dwindling office party. The stakes are at their highest when each family member scathingly reveals who they voted for in the last election cycle, but that thoughtful exchange is fleeting. (Johnny Oleksinski)