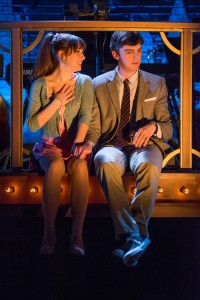 “Sweet Charity” is the pet name neurotic accountant Oscar Lindquist (Jarrod Zimmerman) gives Charity Hope Valentine (Tiffany Topol), a dance-hall hostess he’s fallen in love with after only a few dates. During their manic initial encounter on a stalled elevator, the claustrophobe is quite literally head over heels. When those two words, “Sweet Charity,” first escape Oscar’s mouth, it’s a stark moment of discovery for the guy and a huge victory for an audience who has been anxiously awaiting a knight to swoop in and give this wonderful girl his full attention. But can all that romance get too sugary?

For New York Times theater critic Stanley Kauffmann, it can and did. An Americanization of Fellini’s “Nights of Cabiria,” “Sweet Charity,” despite its steel-cold cyclical finale, was poorly received by Kauffmann in 1966 because of the familiar characters and its, well, sweetness. “The good-hearted dumb broad is one of the oldest stage clichés,” he wrote after pummeling playwright Neil Simon’s book of “pattern dialogue” and Cy Coleman’s score (lyrics by Dorothy Fields) in which “there is not even a tune that one would want to remember.” Ouch.

Well, Kauffmann was reviewing a production far, far removed from the full-blooded, euphoric, soulful, no-holds-barred fantastic “Sweet Charity” that opened on Thursday night at Writers’ Theatre in Glencoe. Director Michael Halberstam’s seductive, peripatetic revival takes the musical comedy’s titular sucrose and introduces an undercurrent of real-world misfortune, so honest and recognizably human. This is a “Charity” that resonates with everybody, but especially with those folks who are stuck in a rut, looking to make a big splashy change.

The production makes some big changes, itself. Through its steady supply of belly laughs and enamoring forward motion, there’s a maturity to Charity’s wild escapades through Manhattan’s high and low society. For one, the story is completely excised of the usual schmaltz associated with musicals—an appealing temptation lurking around every corner in a Gwen Verdon star-vehicle that structurally borrows many a page from the Broadway playbook. Thankfully, Writers’ production has burned the playbook to an ashen crisp.

Halberstam has trail-blazed in the opposite direction. “Sweet Charity,” a classic by most standards, has a cast of only eleven sublimely transformative actors, an orchestra of five (lead by Tom Vendafreddo with music direction by Doug Peck) and a set by Collette Pollard of a collection of chairs and tables with a cameo appearance by a settee.  The production’s size isn’t the only intimate attribute, either. The spoken scenes, usually a means to a song, are scintillatingly performed with the utmost secrecy. They’re sly, unexpected and keep you so far on the edge of your seat that you can smell the shampoo of the person sitting in front. 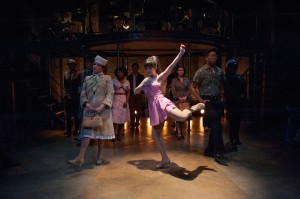 The three other “dance-hall hostesses” (Ericka Mac, Karen Burthwright, Emily Ariel Rogers) who croon out cabaret favorite “Hey, Big Spender!” sing in an exasperated monotone like tired shells. They don’t have an enthusiasm for the world’s oldest profession—not even a fake one—to give the song some disingenuous razzle dazzle. The number is biting and hilarious, as is the jazz-club-revival-tent showstopper, “The Rhythm of Life,” lead by James Earl Jones II, who turns in a bucket of rich characters. Though the ensemble is airtight, they each have a spectacular uniqueness ideal for musical that’s not so much about finding love in a concrete jungle, but enduring life’s cruelties alone.

Perfectly accompanying John Culbert’s bronze lighting, luxurious and dingy, is sensual Fosse-style movement with its warped focus on single body parts, here performed in a condensed thrust stage without much noticeable sacrifice. Jessica Redish’s choreography puts character first. The dance expresses humor, longing, ambivalence, libido, and, like Fosse at his best, melds seamlessly into the drama. The “Rich Man’s Frug,” usually a large ensemble dance, has been reduced to three dancers for its majority. But Redish’s musical staging is so satisfying, it’s as though you’ve eaten just the right amount of delicious food.

Neil Simon’s book, like his zany plays, is in the “set ’em up, knock ’em down” brand of comedy, fit for a ba-dum ching. Topol’s Charity delivers the majority of the zingers. But what Topol has done—in a performance so effervescent, adorable and real—is adopt the jokes as coping mechanisms. And, believe you me, there is plenty for Charity to cope with. She starts and ends the play being pushed into the Hudson River by her respective lovers, but she doesn’t complain; she wisecracks off-the-cuff. That natural approach combined with her joyful ease endears the audience to Charity instantly. She and boyfriend Oscar have a more contemporary relationship than usual—Zimmerman, shyly hysterical with a sensitive yet powerful baritone, doesn’t fall back on the 1960s businessman or nerd stereotypes we’ve all had enough of. If I didn’t know any better, I’d assume this sexy salted caramel was a star-vehicle built for these two. (Johnny Oleksinski)