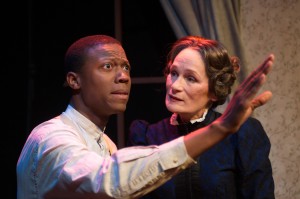 Morrison’s book, set in the close aftermath of the Civil War, occurs in 1873 Cincinnati, Ohio; Edmund’s play takes place in 1881 Athens, a town in the Ohio River Valley. Both tackle the turbulent African-American experience in the shadow of the Civil War, and inhabit a northern state where an absence of Confederate stigma gives way to abounding character opportunities.

What’s more striking though is the supernatural parallel. Beloved is a ghostly, girlish creature that could quite possibly be the reincarnation of the daughter that mother Sethe killed to protect from enslavement. In “Southbridge” Christopher (Manny Buckley), a young black man making a life for himself and his homebound wife (Ashley Honore), has visions. Not fortune-telling, mind you, but emotional readings like a walking-talking mood ring. In two very different interpretations of America post-Civil War, fear of what lurks in the oncoming 1900s manifests itself in mild occultism. Here, the device bears a slight significance to the plot, endearing Christopher to the older widow (Wendy Robie) he eventually has an affair with and is accused of killing, but it contributes a certain mystique and a foreboding tone.

Of course, when a drama kicks off with its main character on trial for the murder of a wealthy white widow—a killing that Christopher adamantly denies any part in—most everything that follows will be a tinge foreboding. Inside of the let’s-start-from-the-beginning frame is a first act of intricate and dense exposition (Book of Recollection) and an excessively crowded second act (Book of Memories Torn) of fast-forward catching up. Christopher and friend Edwin (Lance Newton) plot to purchase a hotel one day, Lucinda speaks fondly of her deceased husband, the Sheriff (Gene Cordon) reminisces about Christopher’s wife Nadia as a young girl. So much of “Southbridge” is a musing on the past or future that even during the scenes that are wholly in the present, there exists an aura of foggy retrospect. It’s a play of passions that never burns.

Director Russ Tutterow has staged the production with ease, and the overlapping scenes—with two characters speaking to Christopher at once from alternate locations—slither like ascending vines. But Michael Mroch’s unattractive set provides some challenges. For one, Christopher’s marriage home and Lucinda’s estate are cemented to opposite ends of the stage, limiting the mobility of action and exhausting the viewer. Also, the hanging multicolored string, representing a tree’s deep roots, and the centuries-old stump in the center of the stage give the play a forestial tone of overripe romanticism. The scenery evokes wooded German folklore the likes of “Doctor Faustus” and “Rumpelstiltskin” (again, supernatural), but foils the psychological and situational complexity of Christopher’s story.

The playwright’s dialogue tends toward humidity. When Christopher and Lucinda embrace for the first time, a back and forth of soap-operatic scale commences. “No, we can’t!” “I am a widow!” “No one will know!” Perhaps an event of such taboo enormity in the nineteenth century deserves reactions so exploded, but the relationship leading up to that brief sexual congress lacks intensity and spark. Robie’s formality and Katharine Hepburn brogue are more than appropriate for Lucinda’s upbringing and lifestyle, while Buckley’s stiffness is at a disconnect from the text. Without a magnetic clash of lifestyles, ideas, personalities and backgrounds, the forbidden relationship at the center of Edmund’s play remains too tame. (Johnny Oleksinski)