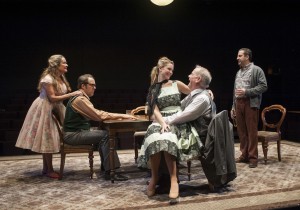 “Why did the chicken cross the road?” It’s a simple enough question and there are any number of suitable punchlines. But when this trivial setup-line is asked, needled, demanded three times in a row in a play by Harold Pinter, it can begin to resemble a form of psychological torture. We may not know why it’s being asked or what the proper response should be, but we know that we feel uneasy. Or we should.

Pinter’s second play, first performed in 1958 to a rather chilly critical reaction, deliberately leaves the audience with a multitude of unanswered questions. Characters contradict each other, are referred to by varying names and conversations rarely consist of straightforward dialogue. By the end of this turbulent three-act show (Steppenwolf’s production is two hours and twenty minutes with two intermissions), it’s normal to feel disturbed and more than a little confused. But what this particular birthday party is missing is a deep-seated sense of dread. 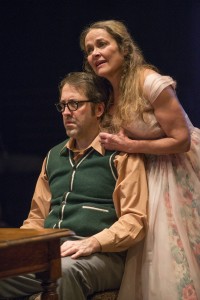 Mahoney soberly anchors this powerful ensemble and Harris, in her first time onstage at Steppenwolf since 1998, is captivating as the mentally and physically shaky Meg. Barford’s Stanley is certainly unhappy about the arrival of these strange visitors, but his character and routines don’t feel well-established enough to make it clear what exactly these outsiders are disturbing. And Guinan gives Goldberg a promising air of wide-eyed faux guilelessness, but he could use a more intimidating side, maybe a little of the quiet hardness Grapey instills in McCann.

Walt Spangler’s wide-open set, with audience members seated on either side, provides no tight spaces, so Stanley never feels particularly trapped here, even when he’s being hounded and interrogated by Goldberg and McCann. And with so many scenes dominated by power struggles between characters, the solitary table in the center of the stage draws director Austin Pendleton to execute a number of threatening, slow-motion chases around it. Predator and prey in these scenes may be determined more by the dialogue than by any physical actions, but the repeated circling of the table grows repetitive and begins to distract.

Very little is as it seems and tense moments abound, particularly during the titular birthday party, but rarely does the tension reach a level high enough to truly stir us. There’s just not enough drive. That’s not to say that the show is uninteresting. The relatively short acts move quickly and there are moments that are almost hypnotic. But these tend to be the quieter, simpler scenes, particularly the bookends of Mahoney and Harris at breakfast. In other scenes, though we may be witnessing the dark underbelly of societal constraints and conformism, we never feel as drawn in as we do watching a couple discuss the morning news. And in a show with both real and implied violence, that’s a bit of an issue. (Zach Freeman)