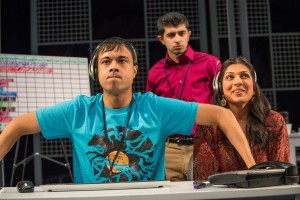 When the cable goes out and you begrudgingly dial your service provider’s help line, who do you imagine is idling on the other end? My mind conjures up a grimy McCormick Place with seemingly endless, tidy rows of desks, and a chorus of popcorn office phones ringing off the hook. Anupama Chandrasekhar’s new call center-set play, “Disconnect,” receiving an invigorating American premiere at Victory Gardens Theater after a debut at London’s Royal Court Theatre—perhaps the UK’s most bountiful reservoir of revelatory new plays—could have quite lazily appeased American popular perception of overseas call centers. But it doesn’t.

This call center, BlitzTel in Chennia, India, has an ultra-modern stainless steel sheen (set by Grant Sabin), and its young, fashionably dressed employees look as though culled from a Groupon. Ross (Debargo Sanyal) Giri (Behzad Dabu) and Vidya (Minita Gandhi) frequently maintain that their daily toiling is a good job and they never outright question that assertion. These twentysomething workers also have some power in the grand scheme of call centers employees; they are the ones who make the calls, collecting debt for an American credit card company. “Disconnect,” a renegade freight train driven by director Ann Filmer, explores what it means to be a citizen of a newly global society—spending double digit hours on the job talking only to Americans, fooling the marks into thinking you’re on their soil.

Chandrasekhar resides in Chennai, but she studied at the University of Illinois, so the play deftly captures the duality of these recent college grads’ existence. The necessity of an American pretense—the nerdy Ross has completely abandoned his Indian accent in favor of a blandly American dialect—to satisfy customers who are bothered for no reason in particular, and the coalescence with their local personas. Where does one begin and the other end? While the playwright certainly has much to say about the quality of Indian work and cities—the office overlooks a large steaming garbage heap—what captivates is the story, a tale of clashing generations and a remarkably funny techno-thriller in which global identity becomes the chief catalyst.

The generational conflict comes in the form of Avinash (Kamal J. Hans), a forty-year-old supervisor whose collection numbers on the New York floor have been unsatisfactory. As a result, he’s transferred to a more easily manageable floor—appropriately enough, Illinois. Avinash supervises three collectors that share very little in common with him: Vidya, Giri and Ross, a “super collector.” The play has an intriguing overarching metaphor defining the young from the middle aged. Avinash drinks coffee; his employees drink Coke.

Coke versus coffee is an apt metaphor in this instance. The young employees have an inkling-to-burning desire to act more like Americans. The craving is evident in their web habits, parties and expenditures. But no one wants to be someone else more than Ross, whose given name is actually Roshan. After a collection call to a woman who’s amassed twenty-three thousand dollars in credit card debt ends with a music-to-his-ears “thank you,” Ross develops an obsessive infatuation with her, and begins calling her constantly under the auspices of payment advisement.

A relationship appears to have formed between Sara Elizabeth Johnson and Ross–He says “I hear you” instead of “I love you”—but the wisdom of the play is that we’re not privy to what the Americans are saying or thinking. We’re forced to trust whatever it is we hear Ross, Vidya and Giri (Dabu plays a very funny character who is deceptively hardworking and earnest) say, and they are, after all, professional talkers.

Filmer has choreographed the vocal escalation of the phone calls precisely for maximum humor and drama. More often than not, all three are jabbering away at some debt-embroiled Midwesterner who singlehandedly embodies the whole recession, but the audience hones in the most pertinent conversation thanks to subtle shifts in volume and emphasis by the expressive cast of actors.

Sanyal’s Ross is angsty and disturbed, wielding an above-it-all ambivalence to authority. But his puppy dog softness towards Vidya (Gandhi’s portrayal is wisely evenhanded) in the play’s center is what makes his demise so ultimately crushing. As he speaks his final lines of impossible hopefulness, glaring out at the garbage dump he imagines is the utopia of Chicago, his voice wavers uncontrolled between an American and Indian accent, completely unsure of who is he is or what lies ahead. (Johnny Oleksinski)