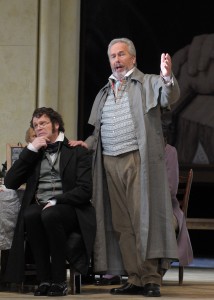 The gargantuan music dramas of Richard Wagner are by and large a world inhabited by gods and heroes ruled by magic and fantasy. The one exception is “Die Meistersinger von Nürnberg, ” Wagner’s single comedy and most life-affirming work that deals with real, down-to-earth people, ordinary citizens who support and maintain the arts.

This is an idea that Wagner had as far back as 1845 when he wrote down most of his own original scenario for “Meistersinger,” but he set it aside for years, only returning when he stalled in his work on the “Ring” cycle after Act I and Act II of “Siegfried.” Wagner would compose “Tristan und Isolde”—which would revolutionize music and develop the expansive chromaticism that he needed to complete the “Ring”—and returned to “Meistersinger” in the intervening years, finishing the piece in 1867.

The work is an autobiographical allegory that seeks to show that the nineteenth-century Wagnerian revolution across the arts was not something that appeared in a vacuum to confound traditionalists merely for change’s own sake, but rather represents a new art form that is a true synthesis of the best of the old and the new.

Wagner’s nod to the past is his uncharacteristically setting the work in a real time and place—sixteenth-century Nürnberg—and using such real historical figures as characters, such as cobbler Hans Sachs and the Master Singer Guild of Nürnberg. But the real stroke of genius was Wagner’s salute to eighteenth-century counterpoint as the means to represent various schools of thought that can clash or harmonize as the work’s action dictates. This is not the progressive Wagner, this is a Wagner looking back, but as only a revolutionary could, that is, transforming everything in the process.

The liberal and progressive nomadic nobleman Walther, in this production South African tenor Johan Botha, composes and sings his verses from the heart and from intuition, not according to what he perceives as a mindless set of rules for their own sake laid out and supported by the Guild.

Town clerk Beckmesser, portrayed by Danish baritone Bo Skovhus, represents the most narrow-minded of the Guild, viewing art as merely the sum of dogmatic rules. Cobbler Hans Sachs, portrayed by veteran bass-baritone James Morris, represents the most open-minded of the Guild, one who respects tradition but can also recognize and respect the meaning of something imaginatively new.

The most refreshing aspect of this production is that Skovhus does not telegraph Beckmesser as a petty and buffoonish caricature, as is often the case. The model for the character was Vienna music critic Eduard Hanslick, famous for his championing the neo-Classicism of Brahms versus what he saw as the wayward and reckless Wagnerian revolution seeking to destroy the past.

There is no question that when Beckmesser is presented in a more three-dimensional manner as he is here that the character is more effective and more humorous. Skovhus makes this a likable, even if inept, character. He is younger, more of a serious contender for the hand of his intended, and sings his musical portions beautifully which make his “errors” against the rules that he so dogmatically supports much more ironic and funny.

Hans Sachs is supposed to be the great link between the past and the future, a middle-aged sage who can even be a potential romantic rival for Beckmesser and Walther. But Morris is not only too old for the character at this juncture, but his once-formidable vocal instrument, one that we were fortunate enough to hear in its prime in his signature role of Wotan in Wagner’s “Ring” cycle across the 1990s and in a multi-year revival a decade ago, is sadly a shopworn shadow of itself. Low notes are often inaudible, high notes unpredictable, tentative timbre and diction such that, without the surtitles, what was actually being communicated would often have been lost, a huge problem given how central Sachs is across such a vast canvas. (Five and a half hours, including two intermissions, the first with $15 box lunches available.)

Botha, for his part, one of the great heldentenors on the planet at the moment, was a bit vocally erratic for himself on Friday’s opening night, his various renditions of Walther’s Prize Song not as seamless as his magnificent Lohengrin two seasons ago might have suggested. Still, in the climactic moment where the goods were really needed, he came through shiningly, even though little of the needed youthful impetuousness of this character was evident. 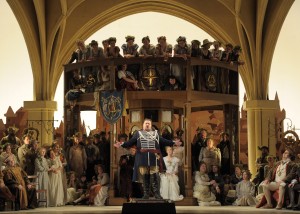 Two Ryan Center alumni had memorable turns, Amanda Majeski was a stalwart Eva in temperament and vocal color and David Portillo was a petulant and comedic David. All of the townspeople were well cast, Russian bass Dimitry Ivashchenko rendering a memorable Act I Pogner’s Aria and Italian bass Andrea Silvestrelli a silk-smooth, introspective and even comedic Nightwatchman at the finale of Act II.

The unsung hero of this production is guest chorus master Ian Robertson, who undertook one of the most daunting tasks any chorus master could face when he was called upon to do “Meistersinger” as a replacement for a new Lyric Opera chorus master who suddenly resigned due to illness earlier in this, his first season here. Robertson held hands with his chorus at the curtain call to a thunderous ovation, well-deserved for extraordinary work given the numerous guises that the chorus appears in during the opera, from a congregational choir at the opening, to wry and then triumphant Greek chorus in the finale, to meddling townspeople in a chaotic musical riot at the end of Act II.

Sir Andrew Davis was having a ball in the pit, and it was admirable that he tried, sometimes in vain, to hold back the orchestra to the transparency that Wagner’s music calls for. This is one of the most deceptively difficult of Wagner’s scores because of its C Major radiance and use of traditional forms. One of the unusual aspects of the orchestration is Wagner’s use of four French horns and two bassoons as part of the inner harmony and despite some horn glitches, the balances within the texture were maintained.

The new production, a co-production of Glyndebourne, where it premiered in 2011, Lyric and the San Francisco Opera, was originally directed by Sir David McVicar but is here being directed by French director Marie Lambert, making her Lyric Opera debut. For the enormous forces that “Meistersinger” requires, to have a Gothic unit set that claustrophobically encroaches across every scene, even the outdoor scenes, seems misguided and inelegant.

The lighting, too, becomes an issue as huge amounts of direct light with few shadows seem to be the favored default setting. The church, the Guild, et al, are over-saturated and Sachs’ study is drowning in bright sunlight from his window as the poignant Act III prelude and Sachs’ own introspection would suggest darkness. The opera finale in the meadow has blindingly bright back walls but is populated more like a Mardi Gras scene with jugglers and stilt-walkers than a Midsummer festival. The scene had been re-blocked after last Monday’s fire-breathing accident that had left a performer with second-degree mouth burns. Putting safety first, the effect was dropped from the show.

Hans Sachs’ finale speech about the purity of German culture came across as unusually distracting in this production, not only because Morris undershot its high notes and his timbre had a raspy quality to it after such a long evening of singing, but also because the transposed setting of the opera in this production was to the early nineteenth century that Wagner had been born into rather than the sixteenth century. The political diatribe which warns against “foreign” influence on Holy German Art, of course, would much later be appropriated by the Nazis but even in Wagner’s own time and within the nationalistic context of Germany having become a united country for the first time, has always come across as a distracting element in “Meistersinger” from an otherwise wise and embracing character stepping out of the fourth wall and politicizing in a short-sighted manner at odds with the broad views and life-affirming aspects of the rest of the work. Perhaps it took the recent election with extremist elements unsuccessfully attempting to monolithically redefine what is “American” to a country of immigrants of all creeds, colors and ethnicities to serve as a vibrant reminder that for all of Wagner’s unbridled imagination when it came to art and its limitless possibilities for human transformation, was never quite able to get his own narrow political mind out of the gutter.