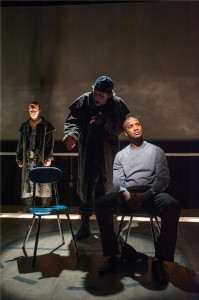 The barbaric Sandy Hook shootings left us all wondering, “when will it stop?” “columbinus,” Stephen Karam and PJ Paparelli’s updated dramatization of the Columbine massacre, drives home the point that for the survivors, it never stops.

The ensemble-driven piece effectively captures not only the details of shootings and their aftermath, but the struggle of America’s youth to make it through the day-to-day. Violence is present in some way in almost all the characters’ lives. And while some teens rise above and move on, Eric Harris (Matt Bausone) and Dylan Klebold (Eric Folks) fall and take thirteen people with them.


The actors capture the piece’s dry humor and devastating pain; Folks’ hangdog humor and Bausone’s barely concealed contempt are particularly potent. The ensemble’s up to the demanding multi-role casting; each character is invested with poignant realism. The aborted relationship between Folks and Sadieh Rifai’s stoner is a heartbreak; Bausone’s canceled prom date with Leah Raidt’s Christian good girl is a sigh of relief.

Paparelli’s direction stays on top of the pacing, the show doesn’t wallow. But the script’s updated coda resolves too slowly; it lacks the impact of the other acts. Anna Henson and Rasean Davonte Johnson’s projections enhance the show’s visual vocabulary. The staging is kinetic and carries a threatening punch, although some of the metaphors are a bit heavy-handed. It’s a bit simplistic to reduce a people to their nerd glasses or baseball cap. But that’s the point. We are all much more than our cliques and their accessories. (Lisa Buscani)