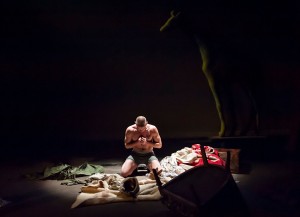 Glancing above and around the stage at Lookingglass Theatre Company on Saturday night, one could spy a handful of animal topiaries of varying size and species—giraffe, rhino, bird—a kind of grass menagerie with a dual purpose. For one, it’s the livelihood and artistic respite of an Iraqi gardener-turned-translator, Musa (Anish Jethmalani, persistently disturbed). In a bold move of topicality on the part of the playwright, Musa planted and shaped this garden on the grounds of the now-dead Uday Hussein’s (Kareem Bandealy) palace.

In Rajiv Joseph’s 2003-set “Bengal Tiger at the Baghdad Zoo,” the bright promise of a post-Saddam Iraq has not been achieved, and the violence of war and insurgency are escalating. Soldiers are afraid, citizens are terrified and, in times of fear, escape is paramount. This lifelike collection of sculptures (set by Daniel Ostling) is Musa’s escape until a horrible, scarring tragedy occurs in its midst. The dreamy garden is also a heavenly afterlife for a slain Bengal tiger. In the play’s first scene, Tiger (Troy West) is provoked by a thoughtless Marine (Walter Owen Briggs); he bites the the guy’s hand off, as is his nature, and is shot to death in retaliation. After roaming the streets, Tiger’s ghost stumbles upon the garden, convinced that it’s heaven and that God is just around the corner.

There is a certain childlike buoyancy to the leafy creatures. Alice could be exploring the Queen of Heart’s palatial compound—Bandealy’s Uday has that Snidely Whiplash brand of overblown oomph that defines Carroll’s playing-card monarch—about to play an off-with-his-head game of croquet, or more presently, perhaps we the audience have reached the eighteenth hole of a miniature golf course. But in Lookingglass’ depiction of what could be heaven—in an altogether shoddy production directed by Heidi Stillman—the result is patently underwhelming. There is no magic to the animals; they are wheeled on by stagehands in military fatigues through an out-of-place red-gold curtain, and are often left onstage to impose on the play’s grittier portions.

Joseph’s script—a rather bland work of magical realism that stands apart from his sublimely human “Gruesome Playground Injuries”—is unfortunately dependent on an abundance of old, tired clichés such as rough-’em-up, careless jarheads and the diminutive Iraqi translator who’s forced to trail them around—the playwright making an ongoing joke out of the language barrier. “You call me a bitch?” is the linchpin of one terse, vulgar “Who’s on First?” between Kev, an overactive marine, and Musa. Though “Bengal Tiger” is predominately a bleak comedy, the play is not without its dramatic indulgences. Musa’s young sister (Atra Asdou) was raped by Uday Hussein years earlier in the garden, and those flashback sequences, while mostly unaffecting, do have a tension to them.

The overall tone of Stillman’s production is, however, confused. The jokes are tepid, the characters are unapproachable and the most terrifying moments come before live gunshots are fired—not out of concern for the possible victim staring down the barrel, but for fear of the loud noise the blank will make in the relatively close-quarters theater.

The performances have smoothed-out texture and shallow personality. As Kev, the soldier who shoots Tiger and is haunted by his ethereal ghoul for the play’s remainder, JJ Phillips speaks a strange combination of Brooklynese and Appalachian, always angling for the laugh. Phillips is, indeed, a very funny and likable actor, but the psychological trauma Kev endures in the aftermath of Tiger’s death is stilted, marred by maniacal laughing fits and simulated hyperventilation. West’s Tiger waxes poetical with the know-it-all passivity of a theological essayist, which is enjoyable for a minute. But the novelty of a caged animal thinking complex human thoughts wears thin, and in the case of West’s performance, is often beatnik pretentious. It would benefit from some more hearty humor.

There is no primal viciousness to the tiger—biting the wiggling hand of the soldier feels out of character for this particular evolutionary predator. So, while Tiger comes to embody everyone onstage—the soldiers in their environmental displacement and cultural unfamiliarity, and the Iraqis trapped inside of an ideological cage, being poked and prodded by an oppressive regime and an outsider military; sometimes biting back—he stops short of being anything remotely tiger-like. The animal has no bite, the landscape has no risk, and “Bengal Tiger at the Baghdad Zoo” is never quite taken seriously. (Johnny Oleksinski)