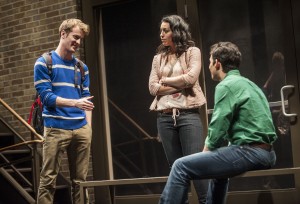 A suicide is always a tragedy. And in the hands of various interest groups and media outlets, as agendas are pushed and stories are filtered or distorted, a tragedy can become a travesty.

Inspired by and roughly based on the 2010 suicide of Tyler Clementi, playwright and Pulitzer finalist Christopher Shinn’s latest work, currently receiving its world premiere at the Goodman Theatre, tackles this heavy subject matter with a solid dose of unexpected comedy while attempting (and mostly succeeding) at remaining above polemics and finger-pointing.

Though a few of Shinn’s points feel obvious, under the direction of Evan Cabnet, most are subtle and poignant. Most notably, as the eponymous freshman student Teddy Ferrara, Ryan Heindl arrives on stage socially awkward enough so that when he mutters the line, “yeah, my roommate is kind of weird” it gets a hearty laugh. But this easy laughter at a social misfit should give us pause later as Teddy’s story unfolds further.


Cabnet has his actors make extensive use of Lee Savage’s minimal set design, moving them in and out of the open stage through a number of entrances and exits down the theater’s aisles and relying on Keith Parham’s lighting design to establish context. Though a table and chairs constitutes the majority of the set, we begin to see the locations surrounding this generic every-university quickly taking shape.

Gabe (Liam Benzvi), the confident, outgoing leader of the Queer Students Group, decides to run for president of the student government at his “large state university” after strong encouragement from his new boyfriend Drew (Adam Poss), a school newspaper editor who uses the paper to push his own viewpoint. Shortly after learning of Gabe’s intentions, his questionably straight best friend Tim (Josh Salt), who also happens to be the outgoing student president, announces his plans to run for reelection, stressing their longtime friendship. 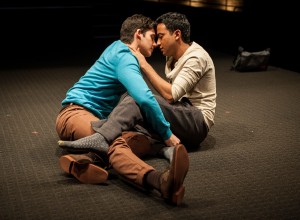 Meanwhile, attempting to placate diversity groups pushing to move school social policy forward faster than the often glacial pace of large academic institutions allows, an absent-minded but earnest University President (Patrick Clear) who harbors not-so-secret senatorial ambitions, convenes a meeting with the Social Justice Committee, a group that only consists of one outspoken liberal professor referred to as Ellen (Kelli Simpkins) and three students (including Gabe).

This is where we first get a hint at Shinn’s viewpoint: while all students, and even Ellen the professor, are referred to by their first names, all authority figures are given generic titles (University President, Provost, Campus Police). Shinn is a faculty member himself (at The New School for Drama), and he might as well call these characters The Administration.

Throughout the show, everyone has a smartphone readily available and there are a number of scenes where conversations are interrupted by texts, calls or even the breaking of a news story. Our phones serve as distractions in our daily life, unintentionally reminding those we’re talking to that there’s someone or something more important than them outside the room. Putting these constant distractors on stage is a welcome addition to a realm where texting, reading and just toying with a smartphone hasn’t yet been fully integrated. In “Teddy Ferrara,” it takes a conscious decision by a character to stop being interrupted by text messages. That’s real life.

In fact, aside from many of the off-the-cuff remarks made by the University President (hilarious and well-delivered though they may be), most of this show feels like real life: every character (even the got-it-together Gabe) has their own set of flaws and issues to contend with, even best friends and lovers keep secrets from each other and good intentions only count for so much. In this world, cyberbullying, loneliness and even the deliberate snubbing of a meek “hi” are all pieces of the same confusing puzzle of suicide.

And gay-friendly groups are given no free passes in Shinn’s world. Despite the lack of a loving homosexual community to readily accept Teddy initially, once he becomes representative of something larger, the Social Justice Committee throws his name out almost as a threat to the university, protests and vigils are mounted in his name and the school newspaper seeks to paint a flattering but incomplete picture of his life.

The high-minded implication that Clementi’s suicide (and other LGBT suicides) are much more complicated than either side would have us believe eventually gives way to the suggestion in this production that society presents today’s LGBT youth with two options: the internally tortured, but externally successful, closeted All-American presented by Tim or the awkward, persecuted outsider represented by Teddy Ferrara; the sticky anonymity of a men’s bathroom stall or a quick leap from the roof of a school building.

There’s plenty of space in between the two; relatable three-dimensional people represented by Shinn’s characters, that contradict this conclusion, but it’s a powerful statement. The final implication may be flawed, but it should lead to the kind of deeper thought and discussions that tragedy deserves. (Zach Freeman)