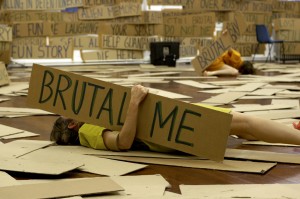 “The biggest surprise is how much it’s running on its own, ” muses Mark Jeffery, performance/installation artist, SAIC professor and curator of a sprawling and ambitious multi-venue performance series taking place across Chicago this winter. This week marks the halfway mark of the third iteration of the biannual performance festival IN>TIME. The first two incarnations in 2008 and 2010, co-curated with Sara Schnadt, were produced by the Cultural Center. When that producer lost her job, along with spades of others at the Department of Cultural Affairs, Jeffery was inspired to cast a wider net for the next IN>TIME and work with multiple venues. Quickly it became clear that many Chicago institutions already devoted to producing performance were enthused to “fold IN>TIME’s work into their programs,” making Jeffery realize how much sustainability for this kind of programming was already built into these sites, from the MCA to threewalls gallery, the Hyde Park Art Center, Links Hall, 6018 North, the Red Rover Series and almost a dozen others involved this year. “What we’re discovering,” Jeffery says, who argues strongly for the position of Chicago as a destination for performance, “is that performance has arrived.” 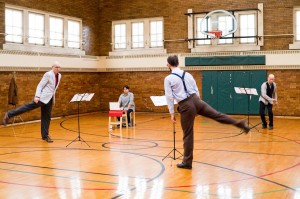 Jeffery is in a position to make this kind of sweeping claim; he moved here in 1996 to work with Goat Island, the performance collective that ran for twenty-three years before ending and finding a new manifestation in Every House Has a Door, whose piece “They’re Mending the Great Forest Highway” premieres at Links Hall this weekend. The show is a high-water mark for the festival for a number of reasons: that the ending of Goat Island was also the direct impetus for IN>TIME’s beginning, that Lin Hixson and Matthew Goulish of Goat Island—now Every House—have influenced a generation of Chicago performance artists—as well as abroad. Another benchmark of IN>TIME is a single performance next weekend of “Laughing Hole” by La Ribot, a deeply influential Swiss choreographer and performer who has cited Goat Island as significant in her own practice. When asked about the future of the biennial itself, Jeffery seems open to future sea changes: “The thing that I think is important is to figure out a way to keep moving.” (Monica Westin)