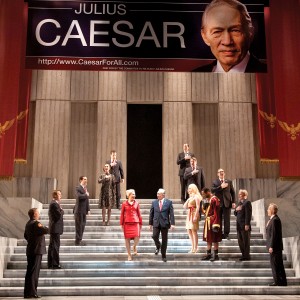 There is a compulsion today to jam a play’s relevance down the audience’s throat—spicing up classical texts with easily digestible contemporary settings. Too often though, what we’re left with is “Julius Caesar” at Chicago Shakespeare Theater: Roman politicians who speak in Shakespearean iambic pentameter, shop at Men’s Warehouse and all the while haven’t a speck of menace, greed or desire about them.

Plus, while lacking in creativity, edging closer to reality brings up a few nagging questions. In a world (and production) of guns, why stab Caesar with knives? “Let us be sacrificers, but not butchers,” right? Did the assassination air live on CSPAN? Since Casca (a sassy Larry Yando) films videos with his Blackberry, are there also metal detectors? In supplanting the play to today, plausibility becomes the antagonist, and the simple, powerful message of ambition and its dangers is all but obliterated.

Director Jonathan Munby’s “Caesar,” which opened on Wednesday night, begins with an impromptu line dance at a Navy Pier-like attraction. The crowd, novelty foam hands in tow, gradually joins in on a group electric slide, at the end of each choreographic phrase shouting “Cae-sar!” Thankfully, the lame party is dispersed by two cops, Murellus and Flavius, who shoot their pistols into the air and lecture about loyalty to Pompey. The first of a symphony of gunshots, the booms attempt in vain to compensate for the production’s inability to shake the audience with Shakespeare. Come Act V, there is even a firing machine gun.

Though “Caesar” appears to be set in modern-day Washington D.C., the approach to the language is musty and uninvolving. The often-colloquial delivery lacks urgency, and these oratorical geniuses are robbed of their ability to inspire and manipulate. For all its visual splendor and ludicrous line dancing, this production never fully believes that the only way to restore Roman pride and the balance of nature is by taking down Caesar. Throw in as many explosions, guns, dances, songs and smoldering cars as you wish, but “Julius Caesar” is an actor’s challenge. 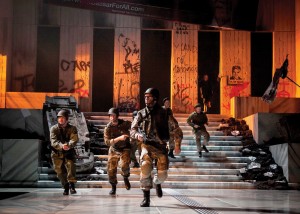 Of course, there is nothing inherently wrong with staged grandeur, even excessiveness. In fact, Alexander Dodge’s spectacular set with its central ascending staircase and columns using the stage’s entire height recalls Lyric Opera’s “Elektra” from earlier this season, and facilitates some paralyzing images in collaboration with Philip S. Rosenberg’s fiery and florescent lighting. Unlike “Caesar” though, there is a bombast to Strauss’ score and an enormity to ancient Grecian emotion that was reflected by the grand environment. While “Julius Caesar” has its larger mechanisms—nature’s rebellion brought on by regicide—the play is more subtly psychological in nature. It tells of ambition’s dangers and how it could lead a powerful person to “scorn the base degrees by which he did ascend.”

Jason Kolotouros’ Cassius is detached from his expressed convictions, lowering the scourge of Caesar (a regal, buttery-voiced David Darlow) to the middle of his to-do list. His relationship with John Light’s Brutus is a casual acquaintance, causing both his initial pleas and the later tent confrontation to ring false. Light, a British actor who frequently appears with the Royal Shakespeare Company, makes a fascinating Brutus. Admirably, he never lets the character’s madness get the best of him, always projecting levelheadedness and constancy. His “It must be by his death” speech interacts with the audience and weighs the pros and cons of the impossible situation with the point-by-point delineation of an accountant. Light also forms a uniquely sweet relationship with his servant, Lucius, thanks to a boyish, clumsy turn by Alex Weisman. But in the final two acts, when the civil strife becomes chaotic, and Caesar’s apparition twice appears to him, there is no struggle. No tragedy.

This is, by far, the funniest “Caesar” I have ever seen, which is quite jarring as the tragedy unfolds. The audience chuckles at the mob’s rapidly shifting attitudes toward Brutus and Marc Antony (Dion Johnstone, eliciting not enough credulity) during their dueling eulogies, in part because the speeches are delivered unconvincingly and with middling emotional impact. One member of the crowd is a mom whose son died in war. She waves his picture in peoples’ faces, much to their annoyance, and eventually becomes the Soothsayer (McKinley Carter). She forewarns Caesar of the infamous Ides of March and wails Latin chants from the balcony that are somewhere between Enya and Monica Naranjo (songs by Lindsay Jones). The Soothsayer, hands outstretched above the panoply of war, appears to be conjuring the uprising out of revenge for the loss of her son. Only after she is shot does peacetime resume. Whether that is Munby’s intention or not, the expansion and repurposing of the tiny, ominous role provides a heap of unnecessary confusion. (Johnny Oleksinski)