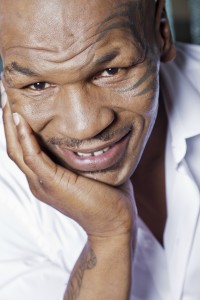 “What the hell is Mike Tyson gonna do up here on stage tonight?”

This is the thought that Tyson attributes to every member of the audience early on in “Mike Tyson: Undisputed Truth.” And from the rowdy reaction of the large collection of fans and other interested parties gathered in the Cadillac Palace Theatre Friday night for the first of a two-night stint in Chicago for this traveling one-man show that has already run on Broadway and in Las Vegas, it seems he knows how to read a crowd.

So, does this show, in fact, consist only of the “undisputed truth?” Well, anything you say is undisputed when you’re speaking into a microphone and there’s no one else on stage to argue with you. And whether everything Tyson says during the course of the evening is undisputable or not is not the point. Undoubtedly former boxer Mitch Green and Tyson’s ex-wife Robin Givens would relish a chance to tell their sides of some particularly juicy stories.

But “Undisputed Truth,” written by Tyson’s wife Kiki Tyson and directed by Spike Lee, is more of a confessional autobiography, a subjective recounting of personal stories in an undisputedly intriguing life, than it is an argument for absolute truth. In fact, the title that Tyson jokingly declares he originally wanted to give the show—“Boxing, Bitches and Lawsuits”—may actually be more appropriate.

Even under the guidance of Lee, no one would call Tyson a masterful stage performer. But he’s certainly a captivating entertainer. He consistently flubs and repeats lines throughout the show (and Friday night he even walked off-stage once to get his earpiece adjusted and attempted to chew on a piece of candy for a few minutes while still talking), but there’s an endearing quality to his unique stage presence. He’s surprisingly personable, giving the impression that he’s discussing the details of his life with a small group at a social gathering rather than standing under a spotlight before more than two-thousand strangers in a dark theater.

There’s hardly a moment of downtime in the almost two hours that Tyson is on stage, reenacting his turbulent life and times with the aid of projected photos and video (and the occasional song, usually turned up far too loud). He paces back and forth, picks out audience members to interact with directly and gives lengthy impressions of various figures in his life, from his mentor and trainer Cus D’Amato (bent over and wagging a finger) to a stoned Brad Pitt (stumbling around while holding up peace signs with both hands).

Throughout the show, Tyson compellingly focuses almost exclusively on the low points in his life (his divorce, his rape conviction, his unstable childhood, his business dealings with Don King), but manages to avoid painting himself as a victim. What he does instead is give us more context for some of his actions, some of which seem to shock even him. He recounts these particular incidents as if to say “Now, what would you have done in a situation like that?”

Despite his mostly jovial persona here, there are still occasional glimpses of the Mike Tyson from yesteryear—the one who in 2002 issued the most chilling threat ever recorded to a freelance journalist who suggested Tyson be put in a straitjacket: “I’ll fuck you till you love me.” Think about that for a minute. But sitting on a tiny stool in the halo of a single spotlight at the opening of the show, Tyson gives an aw-shucks grin. “I’m pretty domesticated now,” he says, waving away any implication that he should still be feared.

So, what the hell does Mike Tyson do up there on the stage? Mostly he just does Mike Tyson, with very few interruptions. And no matter how “domesticated” he may be, that’s enough to entertain a crowd. (Zach Freeman)