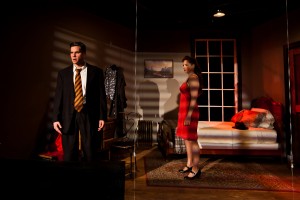 Recreating Edward Hopper’s “Nighthawks” painting is the beginning and the end of the originality in Don Nigro’s new play; the Den Theatre’s treatment simplistically bangs the nail on the head. Coming out of the theater, I felt a bit dizzy from all of the thematic haranguing the audience receives. Between Nigro’s repetitive and formulaic writing and the actors’ singularly forceful portrayal of noir-flat characters, the audience is given quite the pounding, with several bright acting spots.

Nigro is a prolific writer, having penned some hundreds of plays. But this world premiere of “City of Dreadful Night” features formulaic writing that dwells on each minor topic for a minimum of three lines of repetition. On opening night, audible groans and giggling from the audience ensued in the last twenty minutes of the ninety-minute production when “cherry pie” was mentioned for the umpteenth time. His take on film noir stomps through the stage in the most predictable way, femme fatale and hard-ass included. However, those elements eventually drop out and leave possibility hanging when Nigro lets the scene take up its own heat, like when Tony and Anna discuss their past at Coney Island. Too bad Nigro’s script, which exists for the sake of commenting on Sam Spade, doesn’t leave room for the play to develop. It, predictably, ends with an acted-out imitation of the painting.

The Den does not leave this production high and dry, however. Director Ron Wells works his cast into the most noir-esque characters possible, giving the audience nostalgic vibes. Sam Guinan-Nyhart is extremely convincing and interesting as Tony, though Nigro’s deadpan script doesn’t give him much room to display his acting chops. Actress Justine C. Turner, however, nearly disappears when silent on stage, though she was a convincing femme fatale for the first portion of the play. And actor Matthew Isler plays on par with the production: entertaining for a while, but eventually exhausting the viewer’s tolerance for theme and repetition. (Eric Shoemaker)

At The Den Theatre, 1333 North Milwaukee, thedentheatre.com. Through March 16.