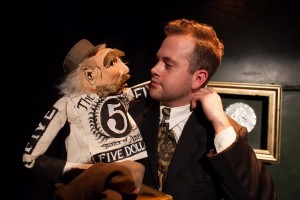 Dog & Pony’s vaudeville send-up about the various forgeries large and small that underlie the American dream makes for outstanding individual cabaret scenes, but “Counterfeiters” doesn’t build up either enough overall coherence or thematic substance to carry the show. Aaron Weissman’s world premiere contains some wonderfully audacious banter, along with impressive singing, dancing and not-quite-ventriloquism from its six actors, who often transcend the punchline-characters they portray: counterfeiting transvestite artists at the height of the 1980s art market who pay their nightclub tabs with illustrated hundred-dollar bills; cold-blooded robber barons; a destitute flapper-turned-communist during the Great Depression; Robin Hood and Maid Marian talking dirty to each other about credit lines. The most interesting reimagined historical character is Samuel Upham, who capitalized on both the gold rush—selling pickles and pipes to California dreamers—and the Civil War, when he printed forged Confederate dollars for curious Northerners.

But more often than not, the historical absurdity is deflationary and flimsy: such as during the somewhat droopy climax of the show, an overdetermined slo-mo boxing match between rhymed-verse-spitting Ben Franklin and the American Dream, embodied by Aaron Rustebakke, the show’s standout, as a Patrick Bateman of “American Psycho” type, all maximum-utility sociopathy as he hawks worthless mortgages. The show hinges on the arrangement of such unlikely foils, but it rests too heavily on didacticism (explaining to us over and over in broad strokes how the American dream went wrong when it’s hard to imagine anyone in America who doesn’t have a more complex understanding of it) and one-idea jokes, dragging down the buoyancy of the show’s charming insouciance. In the end, “Counterfeiters” draws some fun historical threads together that underlie all currency’s fictional elements and required faith, but it feels like it can’t decide between being light entertainment (which it’s got in spades) or a more substantive survey, which it never quite lands. (Monica Westin)