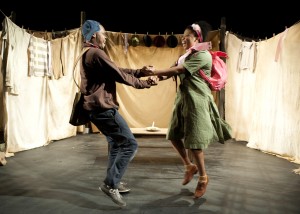 The World’s Stage series at Chicago Shakespeare Theater, among the best and boldest importers of international work in the city, has provided a season of struggle, iron wills and triumphant resilience with its roster of daring offerings upstairs on the pier. Hot on the tails of Belarus Free Theatre’s rebellious protest, “Minsk, 2011: A Reply To Kathy Acker,” is “Cadre” (pronounced “kay-der”), playwright and director Omphile Molusi’s true-story of a young man whose life is forever changed by the horrors of African apartheid.

The intelligence of this World’s Stage season is that the selections go beyond cultural enrichment and into a brusque immersion wherein art combats and informs volatile political happenings. “Cadre,” relayed in narration, organic rhythm and dreamlike, moaning music alongside more tradition person-to-person dialogue, has an emotional impact similar to that of “Minsk, 2011;” the oppression that these people endure is, I’m sure, wholly unfathomable to many breathless onlookers. Unlike “Minsk, 2011,” however, the craft of the storytelling in “Cadre”—a truly engaging and pure fable—is familiar to most theatergoers, in written style and barebones presentation. For me, it is warm familiarity, though, to see a darkened coming-of-age tale the likes of Mark Twain imposed on an altogether different culture and landscape.

Molusi (bringing about infectious smiles) plays his own main character, Gregory, a sweet young kid who gets out of bed every morning for a friend-girl he adores named Sasa. Against the sugary swells of adolescence, apartheid rages in each and every facet of these children’s innocent lives; Gregory’s older brother takes enormous risks fighting against the injustice, much to the dismay of his father, and eventually is killed by a brutal Colonel Botha. Sasa and her family relocate to escape the violence, driving Gregory, himself, to run away from home. After long travel—impressive cardio transitions the play from year-to-year with the aid of date-signifying shadows—and imprisonment, the determined man becomes a cadre, a revolutionary, working as a not-James-Bond-glamorous double-agent right under the roof of the same Colonel who murdered his brother.

Watchable, mortifying and expressively performed, “Cadre” misses the wider scope of the apartheid era in its structural condensation. The play is unquestionably Gregory’s through-and-through, but the story’s meat in which the eventual-cadre is on the run is too sparsely populated. Ample opportunity is present for a bevy of characters with difficult stories of unique hardship and successes. Richer layers of context could only enhance the already moving play, and these actors—Molusi, Sello Motloung and Lillian Tshabalala play each and every character with charm and nuance in quick-fire succession—surely carry the transformative capabilities to tack on a few more. (Johnny Oleksinski)